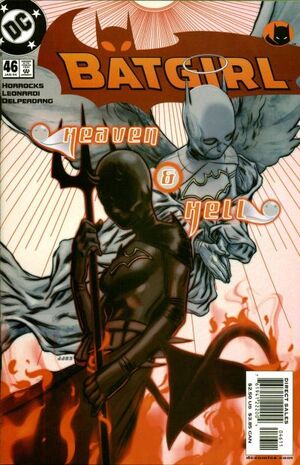 Appearing in "The Lost Girls"Edit

Synopsis for "The Lost Girls"Edit

The drug "Soul" is in limited supply, and a young woman begs her dealer for it. The woman is angry that she had a great high, but it turned her boyfriend into an animal. The dealer explains that this is the way Soul works. If you're a good person, Soul makes you feel like an angel. If you're a bad person, Soul turns you into a demon. The woman says that she'll do whatever the dealer wants in exchange for a hit, but he insists that the cost is $2,000. Batgirl arrives and threatens the dealer to find out who his supplier is. Before passing out from pain, the dealer points to graffiti that says "The Lost Girls."

Batgirl visits Oracle in the Gotham Clock Tower. Batgirl cannot read, and asks Oracle to explain the words she's copied. Oracle explains that the Lost Girls are an all-girl street gang lead by Sunny Love, ex-girlfriend of a gangster named Marty "Switchblade" Morse. Batgirl senses that Oracle is not okay, and asks if something happened between her and Nightwing. Oracle says that Nightwing and her are over, and she does not want to talk about it.

Batgirl goes to the nightclub Illicit to find Marty Morse. Marty happily flips on his ex-girlfriend. He explains that Sunny dumped him and got a job working with a crazy scientist. The scientist is experimenting on people to make them develop metahuman powers. Sunny teamed up with her co-workers to start a female gang with a man-hating mantra.

The Lost Girls have a meeting to discuss profits. Their manufacturer has disappeared, and they only have one barrel of Soul left to sell. Sunny announces that they have to find him. Batgirl's presence is detected watching them by a telekinetic named Faith. Batgirl punches out several of the girls, until Faith strips her mask off. Batgirl is hit from behind by a girl named Hope with supernatural stealth powers. This knocks Batgirl into the barrel of soul, and she accidentally ingests a dose. The Lost Girls decide to wait and see how it affects her. This causes a massive internal conflict inside Batgirl, as she is constantly torn between good and evil. She hallucinates Batman, David Cain, Nightwing, Oracle, Robin, and Superboy yelling at her, all while Hope beats her. Oracle realizes there is a problem and tries to call for back-up, but the rest of the Batman Family is busy. Black Canary is laid up with a broken leg. The conflict inside Batgirl turns into literal manifestations of herself as an angel and demon sitting on either shoulder, arguing with each other. The Lost Girls are about to kill Batgirl, but Batgirl's evil side takes over. Batgirl flies into a berserk rage and knocks all of the girls out, then collapses. Nightwing finds her and picks her up off the floor. Batgirl wakes up, says "You!" and throws him through a window. Nightwing is very confused.

Retrieved from "https://heykidscomics.fandom.com/wiki/Batgirl_Vol_1_46?oldid=1410939"
Community content is available under CC-BY-SA unless otherwise noted.