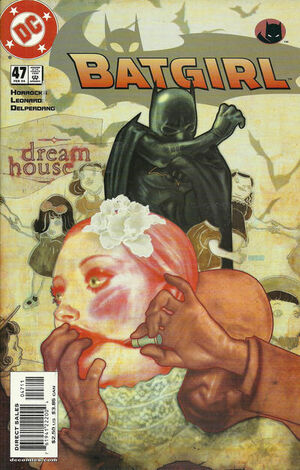 You can't try telling me it's healthy to live in a cave -- only coming out at night, dressed like a bat, to beat people up...

Appearing in "The Doll's House"Edit

Synopsis for "The Doll's House"Edit

Swimsuit model Suki Simich returns to her apartment building after a long photo-shoot, and talks to her doorman Harry. In the mail she receives several pictures of her face pasted onto paper dolls. Suki desperately calls her friend Kim for help, and says that the Doll Man is coming to get her. There is a shadow of a man standing in her apartment.

The next day, a woman made up like a doll is found dead. Reporters announce that this woman was fashion model Vania Vance. Batgirl and Batman observe this crime scene. Batman asks why Batgirl has been avoiding him since Tarakstan, and Batgirl doesn't answer. Batgirl asks who Vania Vance is, and Batman says that he dated her several times as Bruce Wayne. Batman tells her that the case belongs to him.

In her cave, Batgirl watches a news report on the Doll Man killings. They interview linguistics expert Lewis Friedman to profile the serial killer. Batgirl recognizes Friedman as someone her father David Cain knew. Batman talks to Oracle in Gotham Clock Tower. Oracle believes that Batman should trust Batgirl more, but he insists she's been making too many mistakes lately. Oracle tells Batman that Batgirl needs a healthy life, and her career as Batgirl is depriving her of that. Oracle suggests that maybe they didn't save her from a life of abuse, they're contributing to it.

The Doll Man wakes up Suki Simich in his underground Doll House. Suki is physically weak from drugs and has been made up to look like a doll. It's revealed that Doll Man has several more models kidnapped and dressed up. Batgirl visits Lewis Friedman, who is horrified to learn her identity. Friedman explains that he met David Cain at a language convention. Cain bought him a drink to learn more about Friedman's theories on body language. Friedman did not realize Cain intended to try these theories out on a human being. He helps Batgirl figure out the Doll Man's location, and offers to help her if she ever needs anything else.

Batgirl enters the sewers to look for Doll Man. There are traps laid out everywhere on the path, but she manages to survive them. Batgirl finds Doll Man and he tries to shoot her, but she easily kicks him through a wall. Doll Man insists that he never meant to hurt the dolls, he just wanted a family of his own. He forgot Vania's medicine and she tried to run, then got killed by his traps. Batman researches Doll Man's true identity, Douglas Haze, on the Batcomputer. Batman is surprised to find that Batgirl has already solved the murders, and left an anonymous tip for the police. Batgirl stares at Batman while observing the arrest, then swings away into the night.

Retrieved from "https://heykidscomics.fandom.com/wiki/Batgirl_Vol_1_47?oldid=1410940"
Community content is available under CC-BY-SA unless otherwise noted.