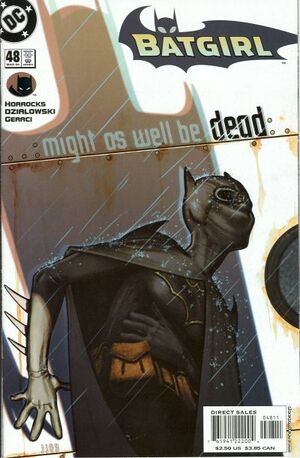 I'm ordering you to stand down as Batgirl. I can't allow anyone to jeopardize the mission, Cassandra. Even you. I -- I'm sorry.

A woman leaves her stroller alone while talking to a bus driver. The baby is stolen and the woman looks frantically around until she sees Batgirl on top of the bus. The kidnappers rush into their car, but Batgirl latches on with the batrope and surfs behind them. The three men Blue, Chill, and Slim desperately try to shake her off. Finally one of them shoots Batgirl in the chest, and she rolls across the road unharmed.

Batman and Oracle talk about Batgirl's recent rebelliousness, as she is no longer speaking to either of them. Batman says that Oracle might have been right when she suggested that he was abusing her for his own personal uses. Batman admits that he's used most of the people in his life for the sake of this mission, including Dick, Tim, Alfred, Oracle herself... and Jason. Bruce thought Cassandra was just like him, someone who needed a mission to find meaning and purpose in her life. It worked at first and she seemed loyal and happy, but recently she's been disobedient and unstable. Being Batgirl seems to be doing her more harm than good. Batman acknowledges that she grew up surrounded by violence and brutality, but all he's done is surround her with more of the same. He wonders if he did it for her sake or for his. Oracle says that Batgirl is 18 years old, and she's probably going through a delayed adolescence. Oracle suggests that Batgirl is lashing out at the nearest father figure as a way of asserting her independence. Oracle reminds Batman that everybody hates their parents at the age of 18, and Batman says that he wouldn't know. Oracle tries to apologize, but Batman has already disappeared.

Batgirl questions a thug she put in the hospital. The thug says he knows that Batman doesn't kill, and Batgirl reminds him that she isn't Batman. This leads her to a warehouse where the other kidnappers are hiding out. The kidnappers are playing the French game Boules. A kidnapper named Harvey asks why they don't play an American game like Poker, and Blue responds that he is tired of bad guys stereotypically playing Poker in their hideouts. Batgirl drops in and kicks everybody in the face. The thugs tell her that the baby is on a cruise ship leaving the harbor. Batgirl follows by dragging herself along on the batrope.

Chill hands his prisoners over on the ship. They're introduced to Ms. Driver, local head of a white slavery company called Human Resources Incorporated. Driver is disappointed in Chill for failing his quota because of Batgirl. Driver tells the prisoners that they will be used for a variety of purposes. Some of them will become soldiers, some of them will become prostitutes, some will become drug mules, some will becomes science experiments, and the babies will be adopted. They will be beaten or killed if they try to escape. Batgirl climbs on board the ship and tries to fight the slavers. Driver holds one of the prisoners hostage, and Chill shoots Batgirl in the back. Batman arrives with Robin and easily dispatches the criminals.

Later in Batgirl's cave, Alfred Pennyworth bandages her back. Batman is furious that Batgirl disobeyed him. He explains that he's been on there trail for weeks, and Batgirl ruined a massive sting operation. In several hours they would have returned to their bosses, and he would've been able to shut down HRI in North America. Batman says Batgirl would have known this if she listened to his calls. Batgirl angrily accuses Batman of using those people and allowing them to be captured. Batman ignores this accusation, and insists that they were perfectly safe. Batman accuses Batgirl of becoming erratic and irresponsible. He orders her to stop being Batgirl and confiscates her costume. Cassandra is set up in an apartment near Gotham University where everything she needs will be taken care of. Cassandra cries as she is forced to leave her cave with a duffel bag of her belongings.

Retrieved from "https://heykidscomics.fandom.com/wiki/Batgirl_Vol_1_48?oldid=1410941"
Community content is available under CC-BY-SA unless otherwise noted.