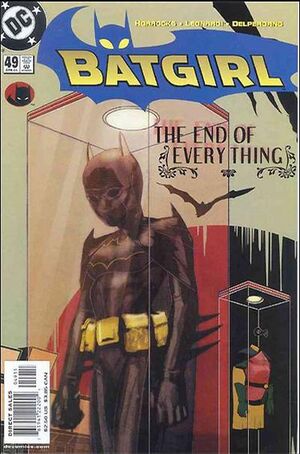 Never speak ill of the dead, my dear... for one day, you shall surely join them.

Appearing in "Down Among the Dead Men"Edit

Synopsis for "Down Among the Dead Men"Edit

Alfred Pennyworth introduces Cassandra Cain to her new apartment, now that Batman has fired her as Batgirl. Alfred explains that her every need will be taken care of, and tries to comfort her. He tells her that Batman is not disappointed in her, and she has achieved much more in her short career than most super-heroes do in a lifetime. Alfred leaves and Cassandra sheds a single tear. Later she walks through the streets of Gotham and spots a Batman t-shirt that makes her upset. In the Gotham Clock Tower, Robin tells Oracle through the vidscreen that Soul is back and worse than ever. He confides in Oracle that he wishes Batgirl was on the streets helping them. Cassandra arrives at the Clock Tower and Oracle is surprised to see her. Cassandra asks "Why?" and collapses crying in Oracle's lap. Oracle tells her that there's so much more to life than being Batgirl, and she's free to experience that now. Cassandra tells Oracle that Batman said she was "erratic" and "irresponsible." Oracle is frustrated by Batman's inability to express any emotion other than anger. Oracle explains that Batman fired Batgirl because he was feeling guilty about depriving her of a normal life. Oracle tells Cassandra that Batman just wants her to be happy, and Cassandra insists that she was happy. Oracle insists that Cassandra is not happy, and offers to do anything she can to help. Cassandra asks for Oracle's old Batgirl costume, and Oracle refuses. Cassandra decides to steal it anyway, and sews it to fit her better.

Robin struggles with a riot of Soul junkies that he cannot contain. Batman is not responding to communication, and Oracle cannot find back-up to help him. Robin is knocked down for a second. When he gets up, every rioter has been knocked out. Batman arrives and recognizes this move as the Falling Leaf, a nerve pinch invented in the 16th Century by Chinese monks. By the time the rioters wake up, the drug will have left their system. Batman tells Robin that he only knows two people who can use the Falling Leaf, David Cain and Cassandra.

Batgirl learns about the corpse thefts, and finds a truck full of stolen dead bodies. This leads her back to the Lost Girls in Gotham Cemetery, the female street gang who are distributing Soul. It's revealed that the scientist supplying the Lost Girls is Doctor Death. Doctor Death requires fresh human cadavers to make Soul because he uses a neural extract. Batgirl is hiding in the pile of bodies they use, and she jumps out to attack the Lost Girls. The metahuman Hope kicks her down and intends to kill her for the pile. Batman arrives and knocks out Hope, looking very disappointed in Batgirl.

Retrieved from "https://heykidscomics.fandom.com/wiki/Batgirl_Vol_1_49?oldid=1410942"
Community content is available under CC-BY-SA unless otherwise noted.