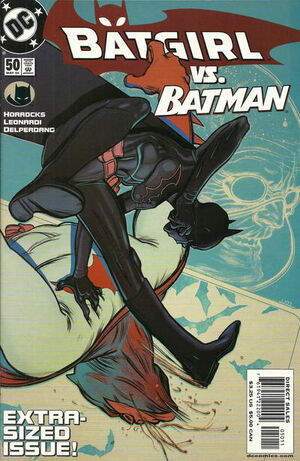 Don't be silly. Why would I make an antidote?

In a flashback, Cassandra Cain remembers life with her father David Cain. During one afternoon, she tried to hug him for support, and he viciously slapped her. They engaged in their regular combat, and she battled him to the ground. She kissed her father on the cheek, and he kicked her in the stomach.

In the present, Batman is confronting Batgirl in Gotham Cemetery. Batman repeats that he told Batgirl to stand down, and this is her last chance to do as she's told. Batgirl refuses, and Batman says that he doesn't want to hurt her. Batgirl observes his body language, smiles, and tells him he is lying. They battle while Doctor Death and the Lost Girls look on. Doctor Death has Sunny Love bring him a red flask with concentrated Soul, and he throws it at Batman and Batgirl. The flash breaks on a gravestone, infecting both of them. Batman tells Batgirl to stop this now, before he is forced to hurt her. Batgirl zips her mask up and says "Hurt me." Doctor Death remarks to Sunny that this is perfect, and they will have escaped long before Batman and Batgirl are finished. Robin arrives and punches Doctor Death in his stupid face.

Batgirl and Batman take their brawl outside the cemetery, as the drugs kick in. They land on top of a train and mercilessly fight to the death. Robin follows in the Redbird with Oracle helping him track their progress. Nightwing is dealing with a riot of Soul junkies when Batgirl and Batman swing through. They ignore him, and Nightwing easily recognizes that they are both on Soul. Oracle sends Robin to get the antidote from Doctor Death. Nightwing tries to stop Batgirl and Batman, but they toss him aside like garbage.

Robin interrogates Doctor Death. He asks why Doctor Death turned to narcotics after a career in weapons of mass destruction. Doctor Death replies that a drug turning thousands of innocent party-goers into homicidal maniacs is a weapon of mass destruction. Robin demands the antidote, and Doctor Death insists that he didn't make one. Robin drops a vial of Soul in the police van, infecting them both. Doctor Death admits that the antidote is in his coat pocket. He is horrified when Robin leaves without administering it to him. Two cops open the van doors and tell him that Robin did not spill Soul, he spilled tomato juice. Robin rushes the antidote to Batgirl and Batman, with Nightwing following in the Wingcycle.

Batgirl and Batman fight across the tops of cars on a bridge. Their actions cause a large gasoline truck to flip over, spilling gas everywhere. Robin and Nightwing quickly evacuate the bridge. Batman tosses an incendiary pellet and there's a massive explosion. Batgirl and Batman both dive into the water below, where they meet again. Instead of hurting Batgirl, Batman pulls her to safety. Batgirl feels the fatherly love in his embrace, and they sit together nicely on the shore. Batgirl tells Batman that her father never let her touch him or hold him. There was only fighting and hurting. Batman hurt her too when he sent her away. Batman explains that he needs to know who she is loyal to, her father, Oracle, or himself. Batgirl tells Batman that she is not loyal to him, she is loyal to the symbol on his chest. They are sitting next to a tunnel, and bats fly out of it into the rising dawn.

Nightwing and Robin arrive with the antidote. Batman tells them to take it to the Batcave for analysis, as he does not need it. Then he tells them that they should go, as they all have work to do. Later, Oracle asks him if he was faking the influence of drugs. Batman has a gas mask in his Utility Belt, and he should've known that Doctor Death would try something like that. Batman tells her that the drug influence was real, although not as effective as Doctor Death claimed. Oracle asks why he would ever put himself and Batgirl through something like that. Batman tells her that Batgirl needed it, and he did too. It was a therapy session for both of them, as Batgirl would not understand any other kind of therapy. He knew Batgirl needed to get things off her chest, and this was the only way to let her express those feelings. Oracle tells Batman that he is crazy. He responds "So they say. But it works." Batgirl and Batman swing off together into the streets.

Retrieved from "https://heykidscomics.fandom.com/wiki/Batgirl_Vol_1_50?oldid=1410943"
Community content is available under CC-BY-SA unless otherwise noted.