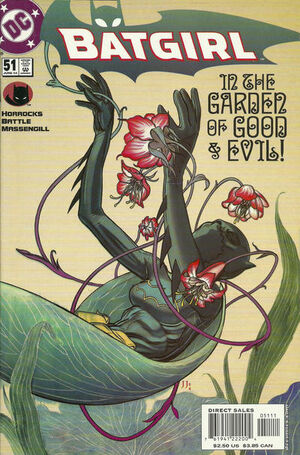 You bet ya sweet patootie, baby!

Appearing in "The City is a Garden"Edit

Synopsis for "The City is a Garden"Edit

There is a massive car chase between the GCPD and a gang of thugs. They drive dangerously close to a homeless man who is obsessed with writing on the streets in chalk. The thugs cause a police car to veer off and flip over by shooting it with shotgun shells. Batgirl swoops in and rescues the homeless man. Batman pops the thugs' tires with a batarang and takes them down himself. Batgirl asks the homeless man what he is drawing with chalk. The homeless man explains that it is a map of the perfect city. Batgirl later asks Batman who the homeless person was, and Batman replies that he's just an old man who should be in the hospital. Batman explains that the man was not drawing a map of the real Gotham City, but the perfect Gotham City as it appears in his head. He draws this map life-size everywhere he goes, because he wants to make his Gotham real. Some nights, Batman wishes that he could.

Arturo Rodriguez and Emily James report on an art installation being unveiled in Crime Alley. The artist, Chris Colson, received a grant from the Wayne Foundation to make a large piece of environmental art.

Oracle visits Cassandra Cain's new apartment for the first time. Barbara exclaims that this is much better than Cassandra's cave, and Cassandra insists that she liked the cave. Cassandra begins using strange old-timey slang, and Barbara is confused. Cassandra explains that she is trying to learn how to talk like a regular person by watching the television. Barbara tells her that nobody on TV talks like a normal person. Cassandra puts on a nice new dress for the art opening. Cassandra does not want to go, but Barbara tells her she might as well enjoy it. Barbara says that it's important for Cassandra to spend some time in the sunlight every day, and try to appreciate things like art.

The artist Chris Colson tries to hit on Cassandra at the opening ceremony. He does this by bad-mouthing Bruce Wayne as a vapid airhead, and he's very embarrassed to learn that Cassandra and Bruce are close friends. Bruce delivers a speech explaining that he funded this project so there would be a symbol of beauty and growth in Crime Alley. They open the installation, and it's revealed that Colson transformed two blocks into a massive garden. There is an air of tranquility and overwhelming natural aromas. This makes Bruce uncomfortable, and he excuses himself. Colson explains to reporters that he recreated the Garden of Eden. This is a place where there are no rules or social order or inhibitions or guilt. The people around him seem to be communing with nature, engaging in physical intimacy, and even disrobing. Colson asks Cassandra what she thinks, and she asks what he's done to these people. Colson tells her that the garden is doing it. They are about to kiss, but the homeless man arrives and interrupts them. He continues drawing with his chalk, and insists that this is all wrong. Cassandra runs out of the garden. Barbara asks where Cassandra is going, and Cassandra replies "work." Colson listens to a strange voice that tells him to let her go. The voice says "I am your muse."

Batgirl patrols the streets that night and fights random unexplained ninjas and stuff. Eventually she follows sirens back to the garden, which is now surrounded by police. The people who made it out explain that everything started out wonderful. However, when night fell, the people inside turned into snarling vicious monsters. There are children still trapped inside, and something is jamming the police communications. Batgirl glides into the garden to investigate.

Retrieved from "https://heykidscomics.fandom.com/wiki/Batgirl_Vol_1_51?oldid=1518678"
Community content is available under CC-BY-SA unless otherwise noted.