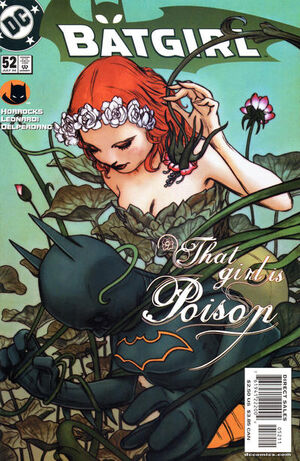 If you are strong enough, you will survive. That is the law of the jungle.

Appearing in "The City is a Jungle"Edit

Synopsis for "The City is a Jungle"Edit

The citizens of Gotham City wake up inside an enormous garden taking over the buildings. They begin happily communing in this environment. Poison Ivy is revealed to be responsible, having taken advantage of artist Chris Colson. Colson is horrified to realize what Ivy has turned the garden into. Ivy tells him that she was just using him, as a way to get resources from the Wayne Foundation through their artistic grants. Ivy decides that Colson is now redundant, and leaves him hanging from a tree.

Batgirl enters the heart of the garden near Crime Alley and is immediately attacked by Oracle. Oracle savagely tries to kill Batgirl under the influence of Ivy's pheromones. Batgirl makes Oracle pass out and drags her outside. This clears Oracle's head. Oracle explains that the garden started out wonderful, but everybody went insane at night. The flowers give off a powerful scent that turns people into vicious animals. Oracle is taken away by a medic, and Batgirl returns to the garden with a rebreather.

Batgirl battles her way through the garden until she finds Chris Colson. Colson explains that Ivy approached him shortly after he received his financial grant from the Wayne Foundation. She told him that she would be his muse, and plotted the garden as his next artistic installation. He didn't realize that she would use the flowers as a mind-altering narcotic to brainwash people. Ivy stands in the center of the garden, at her Tree of Knowledge, giving fruit to people. Batgirl swoops in and kicks Poison Ivy in her stupid face. Ivy tells Batgirl that no matter what she does, the garden will spread beyond Gotham and throughout the land. Ivy ties Batgirl up in vines, and tells her followers to kill Batgirl. Batgirl tosses an explosive at the Tree of Knowledge, destroying the garden and ruining its effect on people. Ivy collapses in tears.

Batman arrives in the Batplane, and explains that he's been away on JLA business. Poison Ivy angrily says that his girlfriend ruined everything, and Batman tells her that he and Batgirl are just friends. Poison Ivy makes a last ditch attempt to kiss Batman and control him, but he tells her "not tonight." Batgirl swings through the city later. She sees the homeless man who is still drawing his map of the perfect Gotham City, and she smiles.

Retrieved from "https://heykidscomics.fandom.com/wiki/Batgirl_Vol_1_52?oldid=1410945"
Community content is available under CC-BY-SA unless otherwise noted.