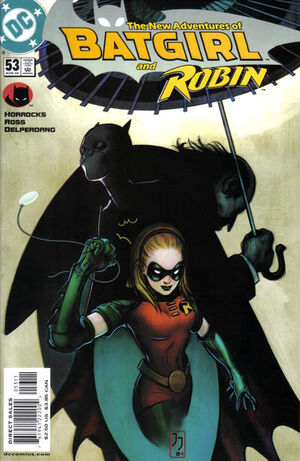 One day we'll finish you once and for all, Penguin -- you and all the other loathsome criminal parasites! We'll wipe you out like the vermin you really are. And then this will be a good, safe, clean city -- a place where children can grow up free from your corruption and filth!

A young girl named Melanie has a dream that she is being chased by a bat. Melanie wakes up and climbs out of bed carrying her penguin stuffed animal. She goes to her mother's room, and asks where her daddy is. Her mother tells Melanie that her daddy is out tonight working again.

Batgirl takes down a group of thugs working for the Penguin. They try to shoot her with an experimental handgun they're smuggling, which is explosive. Batgirl asks Oracle for back-up, and Batman sends Robin to assist her. Robin arrives and takes down the two thugs, Frank and Roy. Batgirl is surprised to learn that Robin is now her friend Stephanie Brown. Later, Oracle explains that the Penguin has smuggled in a shipment of these weapons. They are supposed to be the most powerful handguns in the world, and he intends to sell them for profit. The girls decide to deal with it themselves instead of bothering Batman.

Frank and Roy deliver the shipment to Penguin at his warehouse. Penguin has customers lined up, but knows that he can't move them with the Bats on his trail. Roy insists that he cannot take another beating like that, as he has a wife and kids. This gives Penguin an idea.

Batgirl and Stephanie swing through the city. Stephanie explains that Tim Drake quit being Robin, and Batman asked her if she could do it instead. This is her dream come true, and she couldn't be happier. They break through the skylight of Penguin's warehouse, but he has already gone. Roy returns home to his daughter Melanie, and asks to see her school bag.

Batgirl and Robin take down Penguin's thugs until they eventually arrive at Roy. Roy is walking Melanie to school. When Melanie leaves, they force him against a wall and interrogate him. Batgirl observes how scared Roy is. Roy confesses that the Penguin is forcing his henchmen to use their children as couriers. Melanie delivers the gun to a man named Mister Gouger in a bar. Mister Gouger refuses to pay a little girl, and she angrily threatens to call the police. Gouger tells his associates to kill Melanie. Batgirl and Robin bust through the windows and take down all the thugs in the bar. They corner Melanie, and she pulls the gun on them. Robin comforts her and convinces her to put it down.

Later, Batgirl and Robin arrive at the apartment of the Penguin and his girlfriend Cindy. The Penguin decides to leave his girlfriend as she cannot pack quickly enough. Robin heavily beats the Penguin and throws him into furniture, while telling him what a scumbag he is. Batgirl eventually stops her from going too far. They watch the police arrest Roy while Melanie looks on. Stephanie remembers the first time the police arrested her father, and states that she didn't know who to hate more: her father, the police, or the whole world. Robin wonders what it will take to finally get men like the Penguin off the streets so they can't destroy any more lives.

Retrieved from "https://heykidscomics.fandom.com/wiki/Batgirl_Vol_1_53?oldid=1483529"
Community content is available under CC-BY-SA unless otherwise noted.