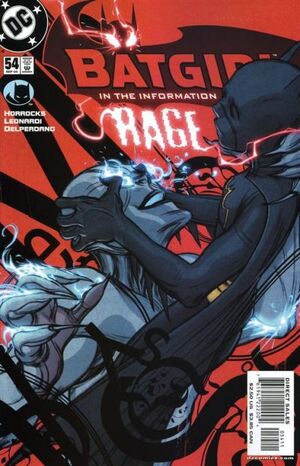 Batman fired me. Again. He said I wasnt... -- I want to thank you for your friendship, Cassie. And I want you to know that whatever he says, I'm not going to give up. Fighting crime, I mean... I'll show him -- I'll show them all...

Appearing in "Cooking the Books"Edit

Synopsis for "Cooking the Books"Edit

Simon Sherwood prepares for the signing of his new book, The Mars Conspiracy. There is a huge line for this greatly anticipated novel. They open the book store, and his first customer is a giant robot in a trenchcoat. The robot kills Sherwood with a shotgun hand, burns the store down, and calmly walks away. Batgirl later arrives at the scene and tells Oracle there were no survivors. Oracle tells her that the author, the editors, and even the printer are dead. This robot has destroyed every single copy of The Mars Conspiracy. Oracle realizes that a copy of the book has been sent to the public library.

Batgirl is sent to find the book. Batgirl hates the library because she can't read. Oracle scolds Batgirl because Oracle used to be the head librarian. Batgirl meets a new librarian named Emily who agrees to help her in the search. The library's security cameras go dead. The robot enters the building, and Batgirl descends to challenge it. The robot begins blasting away at everything, and Batgirl realizes it is not human. The robot sees Emily holding The Mars Conspiracy and begins targeting her. Batgirl carries Emily out of the way. Emily explains that the book contains information on the robot. It is a cybernetic assassin called Project Mars that Simon Sherwood helped design. Batgirl wants to leave, but Emily insists that they must stop Project Mars destroying the library. Batgirl does not understand why Emily cares so much about the library, which is "just books." Emily angrily insists that the library contains irreplacable information.

Batgirl tries to distract Project Mars. Emily reads The Mars Conspiracy to look for a weakness in his design. Batgirl battles the robot until Emily finds its self-destruct code. The robot shoots Emily before she can read this word aloud, "PEACE." Batgirl picks up the book but cannot read the words. Batgirl tries to explain the word to Oracle, and Oracle is furious to realize Batgirl doesn't even know the alphabet. Oracle asks Batgirl how stupid she can be, and Batgirl tells her that she's tried really hard to learn but she can't. Batgirl tricks the robot into reading its own self-destruct code. There is a massive explosion, damaging the library and destroying the last copy of The Mars Conspiracy.

Later that night, Oracle apologizes to Batgirl for getting emotional about the library and calling her stupid. Batgirl refuses to talk to her, puts on her mask, and leaves. Stephanie Brown approaches Batgirl as Spoiler, and explains that Batman recently fired her as Robin. Spoiler thanks Batgirl for her friendship. Then she tells Batgirl that no matter what Batman says, she will not give up crime-fighting. Spoiler is determined to prove Batman wrong about her. Batgirl returns to her apartment alone. She pins the page fragment that said "PEACE" to her wall and stares at it sadly.

Retrieved from "https://heykidscomics.fandom.com/wiki/Batgirl_Vol_1_54?oldid=1410947"
Community content is available under CC-BY-SA unless otherwise noted.