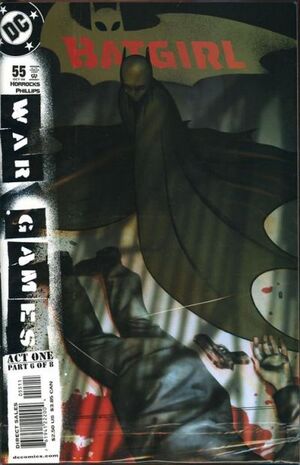 Two hitmen working for the Odessa Mob approach a children's playground. The smaller one, Yakov, is reluctant to kill a small child. His partner explains that the old rules are finished, and they will strike at their enemies where it hurts the most. Batgirl arrives and beats them unconscious before they can hurt anyone. Oracle continues to direct Batgirl around the city to different hotspots as the gang war rages. Batgirl tells Oracle that the Odessas are targeting Mafia family members. This means the war is about to get a lot worse.

Batgirl asks Oracle where Stephanie Brown is. Oracle snaps at her and reminds her that Stephanie was fired as Robin. Batgirl tells Oracle not to talk to her like she's stupid. Oracle apologizes and says that she's gone without sleep for thirty hours. Police dispatch puts out a call for all units to go to Louis E. Grieve Memorial High School, where there is a shoot-out. Oracle reports to Batman that there was a bungled mob hit at Tim Drake's high school. Batman drops the men he's fighting and goes straight to the school.

Stephanie Brown is back on the streets wearing her Spoiler costume again. Spoiler fights several gangsters until one of them gets the drop on her. Batgirl arrives and saves Stephanie's life with a batarang. Batgirl tells Spoiler to go home, because she shouldn't be on the streets. Spoiler leaves, but Batgirl runs after her. Batgirl asks if Spoiler is lying to her when she says she'll go home. Spoiler doesn't say anything, and jumps off a rooftop.

Oracle tells Batgirl to drop whatever she's doing and rendesvouz with Batman at Louis Grieve High School. Batgirl leaps onto a police helicopter and rides her way over. The building is surrounded by reporters and SWAT officers. Batman hides on the same rooftop as a SWAT team by staying in the shadows. Batman gives orders to Batgirl and Nightwing. Oracle angrily insists that Batman should let her coordinate their plans because she has more information. Batman tells Oracle that what he needs from her is radio silence. This makes Oracle even angrier.

Batgirl has leapt onto the news copter of reporter Arturo Rodriguez and his cameraman Charlie. When she jumps down, they feel the copter shake. Rodriguez insists that he saw Batman, but nobody else on the helicopter believes him. Batgirl has to meet up with Batman on the opposite side of the building, avoiding dozens of cops and reporters in broad daylight. Batgirl sneaks right through a giant crowd by using any cover she can find and staying in the shadows. Suddenly everybody hears gunshots inside the school.

Retrieved from "https://heykidscomics.fandom.com/wiki/Batgirl_Vol_1_55?oldid=1506946"
Community content is available under CC-BY-SA unless otherwise noted.