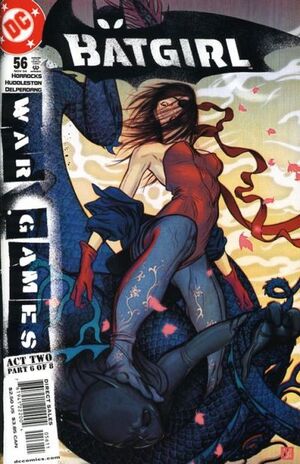 I want you to pass on a message for me. To Batman. Tell him he's finally... might I add quite successfully... turned my clinic into a morgue. Now get out.

The streets of Gotham City are a war-zone. A lone woman walks through the fires and corpses, as seen through a sniper's crosshairs. Batgirl swings in and saves this woman from getting shot. Batgirl angrily tells the woman that there's a curfew, and she has to stay inside until morning. The woman insists that she got off work late and she needs to feed her cats. Batgirl takes down the sniper, who explains that he's freelancing for the Moxons. They told him to hold down this street. Batgirl tells him that Moxon is dead, and the sniper says he doesn't care who's paying him. Batgirl asks if the sniper has seen Spoiler, and he says that he hasn't. She sees six notches carved into the windowsill representing the sniper's kills, and brutally knocks him out.

Black Mask gloats over the body of Orpheus, who he just murdered. He takes off Orpheus' helmet and finds a transmitter inside that will give him access to Batman. Hush shows up to talk to Black Mask. Black Mask says Hush had one chance to join him, and threatens to kill Hush. Hush tells him not to be stupid, and explains that he has a proposal. Hush agrees to stay out of the power struggle if Black Mask will let Hush be the one to destroy Batman. To show his good faith, Hush offers to give Black Mask the location of the Batcave.

Batgirl visits the Thompkins Clinic to ask if Leslie Thompkins has seen Spoiler. Leslie tells Batgirl that she does not have time for this, and angrily snaps at her for perpetuating the cycle of violence. Batgirl tells Leslie that this is not their fault, and Batman didn't start this. Lynx arrives with the Ghost Dragons to take over the clinic. They announce that it will be their exclusive field hospital, and they threaten to harm Leslie when she refuses to cooperate. Batgirl battles the entire street gang single-handedly. Lynx tells her underlings to distract Batgirl while she enters the "trance of the Ghost Dragon." They swarm Batgirl with katanas and begin to actually land blows on her. Lynx attacks Batgirl, much more powerful than she normally is. This fight takes them inside the clinic. Lynx's henchman tries to stab Batgirl in the back with a sword, but Batgirl spins around at the last moment. The henchman accidentally chops Lynx in the back of the head, killing her. Batgirl scares the other Ghost Dragons away, with their leader dead. Leslie Thompkis is outraged, and tells Batgirl to pass on a message to Batman. Leslie says that Batman has finally succeeded in turning her clinic into a morgue, then shouts at Batgirl to get out.

Retrieved from "https://heykidscomics.fandom.com/wiki/Batgirl_Vol_1_56?oldid=1506945"
Community content is available under CC-BY-SA unless otherwise noted.