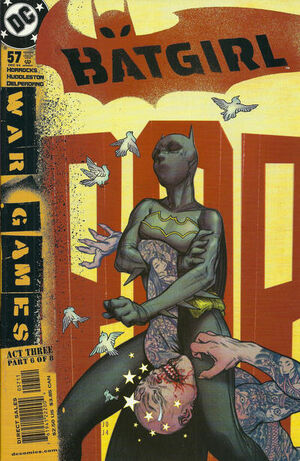 I am the new, undisputed, absolute crime lord of Gotham City. I am everything this city deserves -- and more. I am the darkness that fills the heart of every living soul in this sordid little town... including the blackest, most twisted soul of all... I think you know who I'm talking about.

Arturo Rodriguez reports on the gang war live in the streets for WBGK Action News with his cameraman Charlie. The anchor Chet asks him questions, and Arturo says that it has devolved into a violent free-for-all. Rodriguez announces that this is the fault of Batman, who is now doing more harm than good.

Oracle tells Batgirl that Onyx needs her help. Oracle asks if Batgirl has noticed any kind of pattern to the random gang violence, which is starting to feel more disciplined.

Onyx has been captured by henchmen working for Killer Croc. Their leader Jaws is beating her for information about Croc's disappearance. Onyx manages to break free and fight her captors again, but they subdue her with a baseball bat to the head. They decide to ask her where Batman is instead. Batgirl arrives and takes on the entire gang single-handedly. Jaws puts a gun to Onyx's head, but Onyx kicks him and takes down the guards holding her. Batgirl uses a batarang to stop Jaws pulling the trigger, and Onyx punches him out. Onyx warns Batgirl that something has changed and somebody is taking control of the situation.

The gangs begin working together. Gangsters in the Escabedo Cartel, Ghost Dragons, and Odessa Mob all respond to orders telling them to meet up at Gotham Central. They worry that it might be a trap, but they have nothing to lose. There is a massive shootout with the police, and the gangsters force the police to retreat.

Black Mask casually strolls through the chaos until he spots Arturo Rodriguez. Black Mask tells Rodriguez that he is a fan of his work, and offers to give them an exclusive scoop. Arturo and Charlie are terrified, but they go along with it. Black Mask announces on live television that he is the undisputed absolute crime lord of Gotham City. He declares that Batman is a public menace and a law-breaker equally as bad as the city's criminals. Black Mask says that he has summoned the entire criminal population of Gotham to witness the end of an era, as Batman falls and Black Mask rises. He leads Arturo and Charlie to Gotham Clock Tower, which he mistakenly believes to be the Batcave. Oracle realizes they are right outside her lair and about to discover her.

Retrieved from "https://heykidscomics.fandom.com/wiki/Batgirl_Vol_1_57?oldid=1515015"
Community content is available under CC-BY-SA unless otherwise noted.