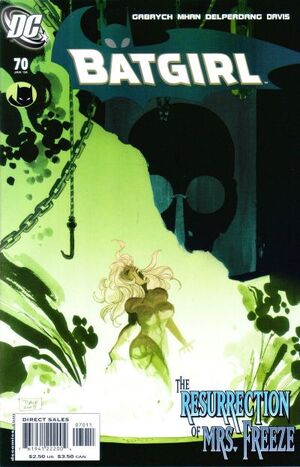 Love burns. It kills. And above all husband, love destroys! No! Not Nora anymore! I am...Lazara.

Appearing in "Destruction's Daughter, Conclusion: The Resurrection and the Life"Edit

Synopsis for "Destruction's Daughter, Conclusion: The Resurrection and the Life"Edit

Thanks to Batgirl's help, Mister Freeze is finally able to revive his beloved wife, Nora. However, during the process, as a result of years in Freeze's machines, Nora absorbed the alchemy of the Lazarus Pit gaining the ability to raise the dead and manipulate life. Angry at what her husband has transformed her into, Nora unleashes a blast of energy, killing Freeze's men, while bringing dead plants and animals back from the ground with each step. Taking the name Lazara, Nora continues to blame Freeze for everything wrong about her, and lunges forward to attack him. From the shadows, Nyssa launches an attack on Nora from behind, planning on running her through with her sword, forcing Batgirl to jump in, yelling that she refuses to let Nyssa kill. As the two grapple, Nora takes the opportunity to use her new-found powers to raise hundreds of undead, victims of one of Milosevic's Ethnic Cleansings that Nyssa had constructed on top of. Confirming that the Undead aren't actually living creatures, Batgirl and Nyssa begin to fight them, letting lose and hitting with everything.

Alpha and some of his fellow assassins appear, and help fight off some of the undead, but when Batgirl questions Alpha's motives, he quickly reassesses the situation and flees. Meanwhile, one of his allies is stabbed from behind by a blade-wielding warrior, causing him to collapse. Moving quickly, Batgirl takes down the zombie and patches up the fallen man, applying bandages and warning him to escape to see a doctor, before returning to the fight. Across the room, Mister Freeze desperately tries to reason with his wife, begging her to stop. His cries fall on apathetic ears, however, and Nora claims that because of him she is now a monster. A zombie leaps at Freeze from his flank during the conversation, pinning him to the ground, while Nyssa charges Lazara, revealing that her own time bathing in the Lazarus Pit has made her immune to Nora's powers. Batgirl knocks Nora to the ground, causing Nyssa to miss her sword swipe, before attempting to convince her that there are more solutions to problems than killing people. It quickly becomes apparent that Nyssa won't listen, so Batgirl punches her out, only to be attacked by Joey N'Bobo from behind, revealing that Lady Shiva and her Circle of Six are present, watching Batgirl's actions.

Freeze and Lazara fight one more time, with Freeze shouting at her to remember that she is a good person. Lazara nearly gets the upper hand on her husband, but is knocked to the ground again by Batgirl. Cass admits to Freeze that she made a mistake, but if Freeze can freeze her solid again, he can buy himself more time to fix her. After a brief moment of thought, Freeze refuses, warning Batgirl to run as he detonates an ice-based explosion, causing the building to begin to collapse. Grabbing on to Nora and holding her in place inside to keep her from escaping. As Batgirl and three of the surviving assassins surface outside, she spots Freeze and Lazara running off into the night. The assassins ask Batgirl what to do next, and she tells them to simply follow her. Meanwhile, Lady Shiva decides to send her Circle on a hunt to find and kill Batgirl in the forest below.

Retrieved from "https://heykidscomics.fandom.com/wiki/Batgirl_Vol_1_70?oldid=1410963"
Community content is available under CC-BY-SA unless otherwise noted.