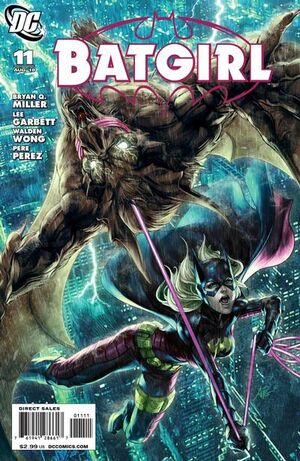 Appearing in "The Flood Part Three"Edit

Synopsis for "The Flood Part Three"Edit

In part 3 of "The Flood," Oracle faces off against the Calculator, while Batgirl is forced to team up with the Calculator's daughter in an attempt to save the citizens of Gotham City from a crippling techno-plague. But who will save Batgirl from an infected and rampaging Man-Bat?

Retrieved from "https://heykidscomics.fandom.com/wiki/Batgirl_Vol_3_11?oldid=1411748"
Community content is available under CC-BY-SA unless otherwise noted.