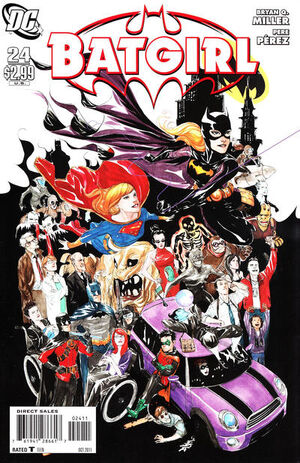 Batgirl confronts her father, the Reaper's mysterious client. Cluemaster puts Batgirl into a coma with Black Mercy. When Batgirl awakens, she finds herself at her mother's hospital. At first, Crystal Brown appears to not realize Batgirl's identity, but after a heart warming conversation she tells Batgirl that she is proud of her. When Batgirl leaves the hospital room, she is greeted by a few fans waiting for her, and sees Robin waiting on a nearby building. Later, Oracle and Batgirl speak about the visions the mercy gave her. When asked if they were too boring, Batgirl gives a vague response, and a few pages from her dream are shown. These include an older Stephanie with a child who we can assume is her future son, and an older Stephanie as a Female NightWing working alongside what appears to be Nell Little as Batgirl.

----
Retrieved from "https://heykidscomics.fandom.com/wiki/Batgirl_Vol_3_24?oldid=1483542"
Community content is available under CC-BY-SA unless otherwise noted.