Start a Wiki
Part of the 'Batgirl: Batgirl Wanted!' event 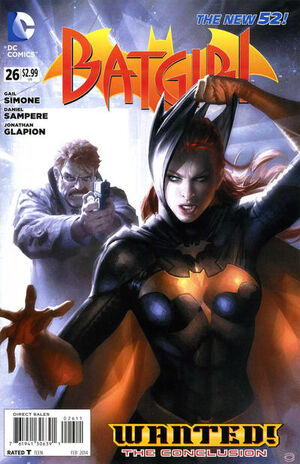 Do you think I'm a fool? I'm a cop. A good cop. If I'd wanted to know who was under all those capes, I would make it my business. I'm not going to arrest you. For now. But you aren't welcome here. Ever. Go.

Barbara Gordon has had some rough weeks. She lost track of her identity, having been overcome by several bouts of rage. She feels responsible for her brother's death. She feels responsible for her mother's decision to leave their family again. Then, when she opened up to Ricky Gutierrez, her father shot him and put him into a coma. With so much rage inside of her, Barbara has struggled to find a place to put it. Now that Knightfall has sent a cadre of criminals to torture Jim Gordon, Barbara knows where to put that rage.

Barbara crashes through the wall of her father's brownstone, dressed in the garb of Batgirl that she has been reluctant to wear, knowing that Jim suspects her of his son's murder. Attempting with difficulty to hold back Knightfall's group of criminals, selected carefully from foes with a personal vendetta against her, Barbara tries to get Jim to the basement where they can regroup. Once there, Jim warns that despite saving him, things are not even between them, and in fact, he doesn't trust her.

Meanwhile, with news of Batgirl's intervention, Knightfall suggests that the Disgraced pin Jim's murder on her, given that she's already wanted for murder. Taking that lead, Bone Breaker begins calling down into the basement, warning that this is Batgirl's last chance to escape alive. She cannot hope to take them all on alone. Worriedly, Barbara admits that she likely can't, and will have to rely on whatever her father's plan is. Seeking out his old footlocker in the basement, Jim produces his old blue uniform, along with his service weapon. Unbeknownst to her other employees, Knightfall orders Bleak Michael to burn the house down with everyone in it, should things go awry.

First Barbara attacks with a handful of concussive batarangs. This affords her the advantage of surprise and disorientation. That in combination with the narrow hallways of Jim's brownstone gives her an advantage over their numbers as well. Seeing things going wrong, Bleak Michael prepares to make his move, and kill everyone. Fortunately, though, Jim managed to sneak out of the house while Batgirl was fighting the others, and clubs him into unconsciousness with his old nightstick. Taking another old relic from his past from his footlocker, Jim produces a portable Bat-Signal, hoping that he will be able to get some help, though he is not on speaking terms with Batman of late. Overhearing Jim's warnings of the police's imminent arrival, Knightfall orders everyone to fall back. Batgirl is still hungry for a fight, but Jim warns her that they only got lucky - and that luck should not be pushed.

Hearing sirens on the way, Batgirl realizes that she should leave, but she finds her father's gun to her head, and he announces that she is under arrest for James Gordon, Jr.'s murder. Angrily, he explains that he has tolerated the vigilantes' actions in Gotham because they don't kill - but she crossed that line. He always knew what James, Jr. was, but even so, her actions will have consequences. Grimly, Batgirl responds that he is forgetting the reasons for her actions. She had been concussed by a hit to the head with a sledgehammer. James, Jr. was planning to kill Jim's wife, and had only just killed two GCPD officers. Jim's insistance on blaming her for James' death is because he blames himself for failing to save everyone involved. Barbara suggests that if he believes that she didn't do everything she could to save his wife, he should pull the trigger of his service weapon - easy enough, considering how recently he did so, with Ricky.

Softening, Jim responds that he didn't want to shoot the boy, but Barbara presses that he had seen the gun and made a bad call. It was a human mistake. She too, is human, and begins peeling off her mask, reminding that she will never earn his trust if she keeps secrets from him. Turning away abruptly, Jim responds that he doesn't want to know, begging her to stop. He reminds that he is a cop - a good cop. If he had wanted to know who was under all of the capes and cowls, he would have made it his business to know. Sighing, he admits that he will not arrest her tonight, but that she is no longer welcome there, ever. Through her tears, Barbara realizes that while he doesn't believe that she's a killer anymore, he isn't willing to hear the darkest secret that she needs to share with him - he doesn't want to see who his daughter really is.

On her way home, Barbara receives a call from Ricky's mother, and learns that Ricky has finally wakened from his Coma. This news gives Barbara a revelation. The whole reasons she became Batgirl in the first place was hope - something she needs to find in herself again.

Retrieved from "https://heykidscomics.fandom.com/wiki/Batgirl_Vol_4_26?oldid=1411788"
Community content is available under CC-BY-SA unless otherwise noted.