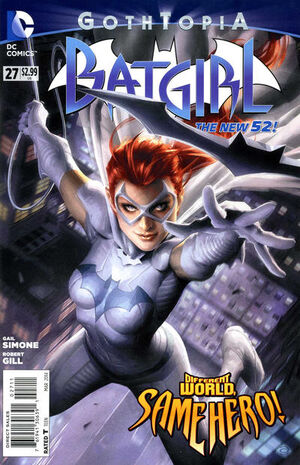 Every day is a beautiful day... when you live in Gotham City.

Appearing in "A Healing Curse"Edit

Synopsis for "A Healing Curse"Edit

Angela Ramirez was a happy person until recently. While her waking life was picture perfect, and pleasant, she recently began to have intense nightmares. And those nightmares are beginning to encroach on her everyday life, turning Gotham from a city of daylight to one of darkness.

Barbara Gordon, meanwhile, has trouble getting out of bed until the smell of her father's cooking bacon rouses her. Though skipping breakfast would be easy, the shared experience of breakfast every morning with Jim is one she cherishes. She cherishes her whole family, in fact - but today, her mother and younger brother are out, so she can spend her morning alone with Jim - until duty calls him away.

Barbara's day, though, will be taken up with another duty that makes her happier than anything - that of playing guardian angel to Gotham City as Bluebelle with her best friend Charise, who goes by Daybreak. Despite Charise' spoiled upbringing and goofy behaviour, Barbara loves her. Not long after meeting for their patrol, Charise' attention is caught by the sound of an ice-cream truck's bells and begs Barbara to indulge with her.

Angela Ramirez works at the Joker Brand Ice Cream Company, and as she manages her employees, a tour bus full of kids arrives, and she decides to give them the tour herself. She collects the children's phones for privacy reasons, and when asked whether they will be getting free ice cream at the end of the tour, she assures them they will get as much as they can possibly eat, with unbidden tears in her eyes.

A scream catches Bluebelle's attention, and rushing down to the street, she discovers that everyone who has eaten the Joker Brand ice cream has died of poisoning. She orders the truck driver to call the other trucks and warn them not to sell any more of their ice cream, but his radio's broken, and nobody's answering the phone at dispatch. Hurriedly, she orders Daybreak to call the Gotham City Police Department and have them stop every Joker truck, but they are disturbed to see that the streets are full of Joker trucks today.

Hijacking a poisoning victim's motorcycle, Bluebelle hurries to another truck to stop anyone from eating the poisoned confectionery. One of the rescued patrons of that truck realizes with horror that his son is at the Joker Brand factory on a field trip today, and Barbara realizes that the kids are in danger.

Angela receives reports that all of the ice cream in town seems to be poisoned, and she shrugs it off, reaching into her briefcase and pulling out a Joker mask and a gun. She mockingly remarks that Gotham is the happiest city on earth, and nothing bad ever happens to children in Gotham before shooting her assistant dead.

Bluebelle and Daybreak meet Detective McKenna and the GCPD outside the factory, but they are prevented from going inside on Mayor Cobblepot's orders, as a sniper is preparing to take a shot on Ramirez.

In the meantime, Charise has learned via her contacts that Angela Ramirez' story is not a happy one. Recently, she'd received a call from the police asking her to identify the bodies of her beloved husband and daughter. They'd gone roller skating without her, and wound up killed' by someone who left them with horrifying rictus grins. What disturbed her, though, was that she only felt joy, and she could not understand why, after losing her family. Every time she sees the Joker Brand trademark, it reminds her of their death smiles - and it's all over the city. So, Ramirez plans to have the children she's gathered eat ice cream with her, and together they will all be happy - and dead with their own rictus grins.

Bluebelle devises a distraction. As Lt. Bullock prepares his sniper to take the shot, he is surprised to hear Daybreak behind him, warning him to get down. She tackles him to the ground just as his police cruiser explodes. The explosion allows Bluebelle the opportunity to drive right into the factory on her motorcycle, wondering all the while just what is going on in Gotham. The murders Ramirez has committed and the unusually high suicide rate of late are completely uncharacteristic of the city with the lowest violent crime rate in the country.

The children refuse to eat the ice cream, and before Angela can force them, Bluebelle crashes through the door. She demands to know why she would want to hurt these kids, and Ramirez responds that she's just having a bad day. Knocking the gun from the woman's hand, Bluebelle warns that nobody has to die today, but she is suddenly distracted by the Joker's face in the company logo, and her mind is flooded with horrific memories of the real Joker, and what he did to her and to her family. Ramirez realizes that in that moment, Barbara remembered what Gotham City really is, and realizes that she's not going crazy.

Unfortunately, a sudden shot from the sniper hits Angela Ramirez in the chest, and she collapses. Barbara removes the mask from her face, and watches over her as she dies, promising herself that she will forget what she saw today - because she'd rather be living the dream.

Retrieved from "https://heykidscomics.fandom.com/wiki/Batgirl_Vol_4_27?oldid=1411789"
Community content is available under CC-BY-SA unless otherwise noted.