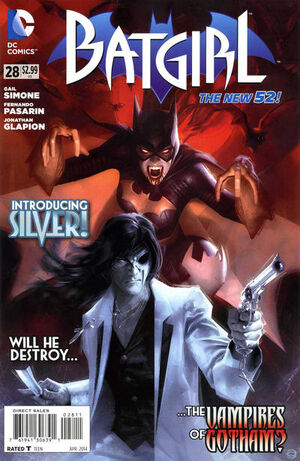 Don't walk away from me, bloodsucker! I've killed dozens like you!

Atsuo Uchida, who calls himself Silver, lives in the secluded suburbs of Gotham City in a veritable castle, served by his butler Ms. Targa. For some time, he has been tracking the most recent sightings of Batman and his allies. In his mind, Gotham's citizenry has fallen victim to a penchant for fetishizing the behaviour of the Bat-Family, and the Batman has made himself secret king of their city. Criminals like the Joker are merely freedom fighters. In their absence, he intends to free Gotham from the tyranny of its "nocturnal destroyers."

That night, one of those destroyers - Batgirl - senses that she is being tailed. Whoever it is, they are doing a good job of it, without revealing their identity. Despite that, Batgirl is preoccupied with the knowledge that copycat crimes are taking place, following in the footsteps of the Brisby Killers, whom she took down early after returning to the mantle of Batgirl. Having tracked down a group of the copycats, she hopes to take them down hard enough that other groups think twice about engaging in the same behaviour.

Having done her research, she knows that there is room for error on her part, and tries to be cautious and restrained. Leaping down into the alley, though, she is surprised to find that the thugs have already been taken down in the mere thirty seconds it took her to get from the roof to the ground. Worriedly, she realizes that it must have been her tail. Turning instinctively, she lashes out at the shadow standing just behind her, only to realize that the one tailing her was Strix.

Apologetically, Barbara helps her to her feet after regrettably punching her friend in the face. Strix seems alright, and so Barbara asks why she was following her. Mutely, Strix retrieves a poster from her belt, indicating that an eight-year-old child was abducted from a hospital, and Strix wants Batgirl to help find her. Batgirl notes that the police could do a fine job of the case, and wonders why Strix wants her to do it, specifically. Silently, Strix points to a warning that the missing child cannot speak either. She can relate. Sighing, Barbara agrees to help, once she's zip-tied the thugs lying around. Watching from nearby, Uchida's mind distorts the truth of the situation, and he imagines that Batgirl and Strix are vampires, feeding on human victims. Realizing that they would be at their strongest just after feeding, he chooses to wait on engaging them.

After calling the police to deal with the thugs, Batgirl makes a second, more uncomfortable call to Charise Carnes. Though Carnes had only just sent a gang of killers to attack Barbara's father, she knows that Cherise feels that as Knightfall, she is helping Gotham - even though it's by means that Barbara cannot tolerate. Unfortunately, Charise's connections are just the kind of connections that Barbara needs to find the missing girl, Cissie Chastain. Barbara's assumptions about Charise's motivations are well-founded, and the debutante turned murderous vigilante agrees to help without asking anything in return. While she waits on Charise's connections to pan out, Barbara and Strix are going undercover.

Meanwhile, at the crime scene from before, Uchida sneaks up to the unconscious thugs and investigates. As one of them slowly regains consciousness, he mistakes another's halloween makeup for legitimate vampirism. The waking girl watches, and begs him to stop as he approaches her unconscious friend with a stake and hammer in hand, piercing his heart for her own good.

At her apartment in Cherry Hill, Barbara tries to find some clothes that both she and Mary can wear while visiting the missing girl's mother - something a plainclothes detective might wear. Unfortunately, Mary becomes obsessed with the idea of wearing Barbara's old prom dress, and Barbara can't bear to disabuse her of it, letting her keep it. After all, with the Court of Owls, Mary had never been allowed to have new clothes. For the mission's sake, though, she convinces Mary to wear a more sensible jacket and jeans combination.

Not long after knocking on the door to the Chastain household, Mrs. Chastain opens the door, and her expression is one of distraught. Barbara can only get out a few words of her introduction before the woman clings to her in tears. Eventually, Barbara learns that there was almost no evidence of violence in the abduction, but no trail to follow either. These kidnappers were professionals - but what's not clear is why they took Cissie. The girl's father had disappeared a year earlier, and the police have guessed that he might have taken her. Her mother doesn't believe that theory. Barbara is sure Mr. Chastain's disappearance is related, though that trail went cold long ago.

Outside the Chastain house, Silver listens in via the bug he planted inside. He had always believed that Mrs. Chastain was involved in the conspiracy to elevate the Bats in the city. Naturally, he assumes that these two new investigators must be the same two bats he saw earlier. As Barbara and Mary step into the street, preparing to go home, they are interrupted by Silver, who announces that he knows they are bats. From his ravings, she Barbara soon realizes that he is disturbed, but she makes the mistake of failing to take a delusional in Gotham seriously.

As she and Mary engage Silver and Targa in hand-to-hand combat, Barbara's mind is on the case. Surely Silver's being outside the Chastain house on this night must be related to Cissie's disappearance as well. Soon, though, the police arrive, and surround them. Despite being stopped here, Silver raises his hands and whispers aside to Barbara that it will do her no good. Whether he is caught here or not, he still has the vampire queen in his possession. He kidnapped Cissie Chastain - and at dawn, she will die.

Retrieved from "https://heykidscomics.fandom.com/wiki/Batgirl_Vol_4_28?oldid=1411790"
Community content is available under CC-BY-SA unless otherwise noted.