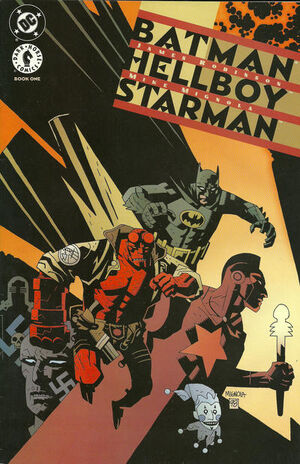 Strange? You're a pot calling me black, if what I've read about you is true.

The retired Golden Age Starman, Ted Knight is kidnapped by a group of neo-Nazi skinheads possessed with electrical powers, whilst giving a lecture on alternative energy sources. Failing in stopping Knight's abductors Batman is summoned by the Bat-Signal and meets the Bureau of Paranormal Research and Defense's agent Hellboy, who helps him in rescuing Ted Knight.

The duo eventually track the group calling itself the Knights of October to a deserted airfield but in the ensuing battle their leader Dantz escaped with the prisoner onboard a small plane. Hellboy vows to go after him but Batman is called away to deal with an escaped Joker. Fortunately, the duo's problems are solved when Ted Knight's son Jack Knight, the new Starman, joins in their mission.

Retrieved from "https://heykidscomics.fandom.com/wiki/Batman/Hellboy/Starman_Vol_1_1?oldid=1430968"
Community content is available under CC-BY-SA unless otherwise noted.