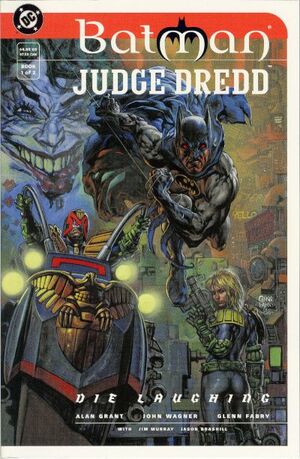 Remember the prediction! Your precog said one day I'd show up to avert a disaster!

Batman drops in on a meeting between Joker and another criminal. Joker has just obtained a belt that can dimension jump to Mega-City. As Batman breaks up the criminal meeting, Joker uses the belt. Instead of transferring Joker to Mega-City, the belt disappears, leaving the Joker behind, unmoving, but with a faint pulse. Batman picks up Joker and carries him out. Meanwhile, in Mega-City One, Judge Dredd is on patrol and stuck in traffic due to the 10,000 hedonists heading to the Megashpere. Some Judges are transporting prisoners to a specially prepared tomb, where they will be encased forever. These four prisoners are the worst Mega-City has ever faced, the four judges: Fire, Fear, Mortis and Death. During the transport, the Joker grabs the four judges, who are each encased in egg-shaped containment crystals. Back in Gotham City, Batman discovers that the Joker's body he carried back to the cave is a side effect of dimensional travel. While he is talking with Alfred Pennyworth about it, Mega-City telepath Anderson appears in the cave. Batman quickly deduces that she has been shot.


Meanwhile, back in Mega-City, Judge Dredd releases a BOLO for the Joker. Around the same time, the Joker, in his makeshift headquarters is trying to devise a way to free the judges from their containment crystals. Joker finally frees Judge Death and the Judge tries to take over his mind. However, because Joker is already insane, there is nothing for the Judge to control. Joker tells Judge Death that he wants to be the Dark Judges' manager. Back in Gotham, Batman has treated Anderson's bullet wound. She awakes and tells him that Joker has freed the Dark Judges. Anderson tells Batman how one of the Dark Judges took over the mind of Deputy Chief Judge Herridan, who issued a command to arrest Anderson. When the Judges came to arrest her, she was shot resisting arrest and managed to dimension jump to Earth, where she found Batman. Batman decides to use Anderson's belt to jump to Mega-City and stop the Joker and the Dark Judges. In Mega-City, the Dark Judges take over four new bodies and show Joker how to do the same. Elsewhere in the city, Batman knocks out a Judge and takes his motor cycle. Batman finds Judge Dredd and tells him that Herridan is being controlled by the Dark Judges. The other Judges think Batman is nuts and try to detain him. Dredd believes Batman and the two of them fight their way through the other Judges. That's when Batman says Anderson said to warn Dredd that the Dark Judges will attack the Megasphere, currently occupied by 10,000 hedonists.