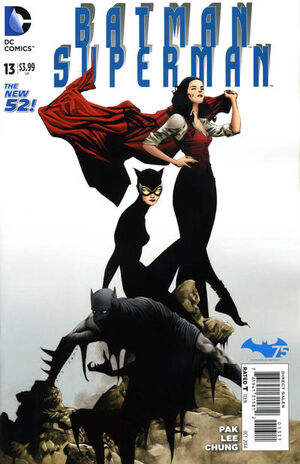 I'm standing here naked in the middle of a strange city and I don't even know my own name. But I feel my heart booming away, slow and steady, and I have the weirdest feeling... that nothing here can touch me.

Appearing in "Eye of Satanus"Edit

Synopsis for "Eye of Satanus"Edit

Satanus is not pleased to find Kaiyo visiting his world unannounced. She responds that she only wishes to rest there a while, and has brought gifts in exchange for his allowing that. She has stripped Batman and Superman of their memories, and they are ready to be born anew under Satanus' guidance.

In Gotham City, Superman finds himself naked and alone in the city without any memories at all. He is surprised when he hears a woman's voice mocking him, and looks up to see Catwoman watching him, hurriedly covering himself. She hasn't long to ogle him anyway, as a monstrous machine begins chasing her down, tearing through the city. In nearby Crime Alley, Batman wonders where and who he is - and why he's dressed up like a bat. He is soon under attack by Scarecrow, and realizes that his muscles remember what he does not. Though he can fight off the Scarecrow with that, he isn't on top of his game, an he takes a dose of Fear Gas. Fortunately, though, with no memories, he has no fears. He pulls a gun, and Scarecrow thinks it a bluff until a Batman who wasn't shaped by his parents' murder opens fire on him.

Wrapping himself in a scrap of red cloth, Superman decides to help the woman he saw, leaping forward with unexpected ease. With hitherto unknown skill, he destroys the attacking machine, and returns to check up on Catwoman, who seems acutely aware of the fact that he doesn't remember her - or himself. She manipulates him into joining her.

Batman heads into an abandoned public restroom and looks at himself in the mirror without his cape and cowl, failing to recognize his own face. His scars are alien to him, too. He takes stock of the contents of his Utility Belt, and decides that he is either a criminal, or something else. Finding a small device, he presses a button on it, and within seconds the Batmobile has arrived outside. Warily, he steps into the driver's seat and says "Home," and the car drives itself all the way to the Batcave, where he hears the voice of Alfred Pennyworth announcing that a change of clothes awaits him. He briefs Bruce on the benefit being held in the manor upstairs, and though he plays the part of the rich playboy well, Alfred becomes suspicious.

Lois Lane, meanwhile, is on her way into Gotham by train, in conversation with a Mr. Mangubat, who was responsible for building the monstrous machine Superman had fought. She hopes to meet with him there, despite his having killed three cops while escaping jail. He wanted her to interview him, so he could prove his innocence, but his cryptic instructions and evasions are wearing thin on her. Despite his claims of innocence, he has sent an android to ensure she complies with his wishes, as the train rips itself from the tracks and morphs into yet another of Mangubat's machines. He explains via the android that he no longer wishes to clear his name, when saving his own life is so much more important. He believes that Superman is trying to kill him.

As they speak, Superman arrives on the scene, and tears the train creature apart. Desperately, Lois begs him to save her and stop risking her life. Compliantly, he grabs her, but admits that he doesn't recognize her or know the name of Superman.

Retrieved from "https://heykidscomics.fandom.com/wiki/Batman/Superman_Vol_1_13?oldid=1430987"
Community content is available under CC-BY-SA unless otherwise noted.