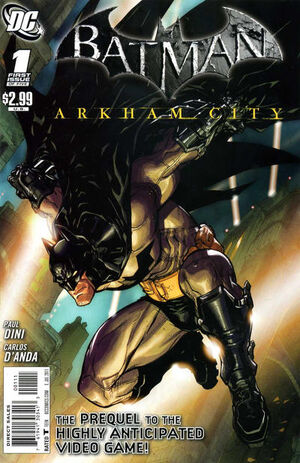 It hasn't been too long since the Joker's plan was stopped and the Gotham City was saved. Joker is suffering from the effects of the Titan drug and will likely die sometime soon. Meanwhile, former warden to Arkham, Quincy Sharp, is now running for mayor, and took all the credit for stopping Joker's plot. Meanwhile, Batman is on a mission of his own. Apparently several crates worth of Joker's Titan formula have made their way to Gotham's shores, and criminals are trying to get their hands on it. A brother and sister duo, calling themselves "T & T", have gotten their hands on the Titan formula and were previous lackeys for Two-Face. Batman went to his old enemy for information about the two, and learns that the brother and sister are on Titan, and plan to eliminate several political figures at a celebration at the new city hall. Batman comes prepared; spraying explosive gel on both his hands and feet in order to defeat the two criminals the same way he defeated the Joker. Unfortunately Batman's efforts were not enough, the two criminals were actually rigged to blow up. The explosion completely obliterated the new city hall. Quincy Sharp was furious and orders that half of Gotham City be sanctioned off to create "Arkham City" a new free-roam prison to dump the scum of Gotham. In the end Batman doesn't feel that Sharp could have created something like this on his own, and suspects that someone else may be pulling Sharp's strings.

Retrieved from "https://heykidscomics.fandom.com/wiki/Batman:_Arkham_City_Vol_1_1?oldid=1413399"
Community content is available under CC-BY-SA unless otherwise noted.