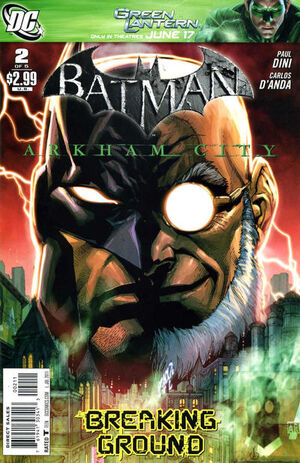 We can bandy semantics all night, Mr. Mayor. But what you have in mind for these miles of Old Gotham is more akin to a wild animal park than a mental health facility.

While preparation continues on Arkham City, Batman breaks into Quincy Sharp's mansion to investigate his plans. Confronted by non-lethal security measures, Batman realizes that he is being tested by Sharp's unseen master, and flees the mansion. At the same time, Joker is revealed to be dying as a result of complications from the Titan drug, with an estimated six months to live. Taking advantage of Joker's weakened state, several Arkham Guards try to kidnap and kill him. Hearing rumors of the plot, Harley Quinn takes the place of one of the guards, and rescues Joker. Harley and the Joker are thrown from their escape boat when Batman attempts to recapture them.Landing within the borders of the new asylum's construction zone, Joker declares himself and Harley the "mayor and mayoress" of Arkham City.

Retrieved from "https://heykidscomics.fandom.com/wiki/Batman:_Arkham_City_Vol_1_2?oldid=1413400"
Community content is available under CC-BY-SA unless otherwise noted.