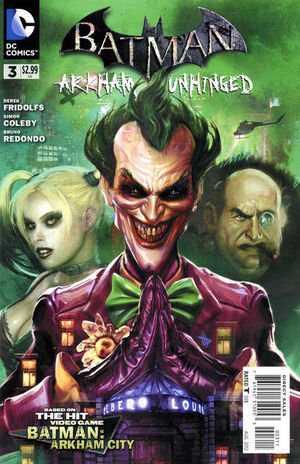 You see? That right there is why I 'ave a "no clowns policy."

The story begins with the Penguin in his office in the Iceberg Lounge. He talks about how most people in Arkham City are forced to be there but he is not. The Penguin chose to stay and run his club. The wall makes it difficult to get materials in and out, but Penguin has a strategy.

Two henchmen of the Penguin come walking in. One of them is in a sling. The two henchmen were supposed to bring back multiple boxes of supplies from the drop-point but, instead, they have one. The uninjured one begins to explain, but Cobblepot interrupts, predicting the Batman intervened. The henchman begins to explain again.

The man explains how he and three other henchmen went to the scheduled drop-spot to get the supplies, but, when they arrived, the supplies were already destroyed.

They walked inside and the entire room was covered with "Hahaha." The Joker's men had gotten there first. The Penguin's henchmen find the delivery man dead and with a smile painted on his face. If their mission wasn't just a failure, the Batman arrives just as Cobblepot predicted. The hero beat them all up, but the uninjured one managed to get out with a single, unbroken box.

Back in Cobblepot's office, the man opens the crate for the Penguin, but his victory isn't much. Inside the crate is a single green wine bottle. Cobblepot orders the lead henchman to throw out the wine, but the thug insists that it is still good.

The thug opens the bottle with his teeth, and, as the cork pops, acid sprays at the thug's face. The Penguin ducks for cover behind his desk as the henchman's face quickly burns off. As two more henchmen run in to take away the dead body, Penguin begins to flashback about one of his first encounters with the Joker many years ago.

Back when the Iceberg Lounge first openned, Joker and Harley Quinn were invited to attend the grand opening. At their table, Penguin welcomed the clown and his girlfriend. Cobblepot even ordered them a bottle of wine on the house. But, when the waitress was delivering the wine, she tripped and accidentally spilled it on the Joker. The clown, still smiling, sprayed acid in the waitress' face with the flower on his suit.

Having just ruined the party, Joker and Harley began their rampage, trashing the club. When Joker and Harley ran outside, their thugs were already their and began throwing pies at the other guests. The clowns made their getaway as Cobblepot watched on. Cobblepot recalls how his buisiness struggled after that incident. He swore revenge on the clowns and his hatred of them grew from there.

The flashback ends when the injured henchman in the beginning of the story notices a letter in the box they collected. Penguin grabs the letter and reads it. It says, "You've been cordially invited to the insane parade!" Cobblepot of course rejects.

In the streets, the Insane Parade begins. All of the Joker's henchmen are acting crazy and simply going insane in the streets. Some of the clowns are holding "Vote for Quincy Sharp" poster that have been vandalized with moustaches and horns. Suddenly, Joker and Harley come riding in, Harley being referred to as "Miss Arkhamy."

Along the parade, Joker makes fun of Quincy Sharp and Two Face, who is standing at his base, the Solomon Wayne Courthouse. Then, Joker begins to mock Batman whom he thinks did not arrive to watch the parade. On the rooftops, however, Batman is watching disapprovingly with his binoculars.

The parade stops outside the Iceberg Lounge where Joker and Harley set the cart they are on ablaze. The clowns runaway in a frenzy laughing at the Penguin. Cobblepot is watching them from the second floor window when a cream pie splatters in front of him. He walks away, enraged at the Joker.

Later that night, a bunch of Penguin's men are cleaning up the mess outside the club. Cobblepot is having a large and extravagent dinner made by his personal chef. The chef brings out one more course, a vegetable platter in the arrangement of a smiley face. Penguin shoots his chef in the head and gets up to make his own dinner.

Retrieved from "https://heykidscomics.fandom.com/wiki/Batman:_Arkham_Unhinged_Vol_1_3?oldid=1413381"
Community content is available under CC-BY-SA unless otherwise noted.