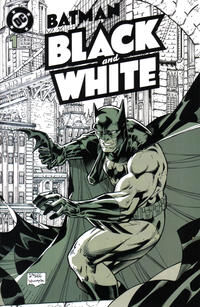 Batman conducts an autopsy on a woman killed by a mugger.

Appearing in "Two of a Kind"Edit

Synopsis for "Two of a Kind"Edit

Two-Face has his face reconstructed and is seemingly rehabilitated, but is tempted back to the dark side by a femme fatale.

A surrealist take on Batman defeating a gang of criminals led by a woman.

Batman hunts a murderous vigilante who is lethally punishing people for lack of manners and civil respect.

Appearing in "The Devil's Trumpet"Edit

Synopsis for "The Devil's Trumpet"Edit

A jazz musician's search for a legendary trumpet said to have special powers leads him into the path of the Batman.

Retrieved from "https://heykidscomics.fandom.com/wiki/Batman:_Black_and_White_Vol_1_1?oldid=1413404"
Community content is available under CC-BY-SA unless otherwise noted.