Blind Justice is a Batman storyline written by Sam Hamm and illustrated by Denys Cowan. It's a three-part arc but the issues are oversized as a special event to celebrate the 600th issue of Detective Comics. The story involves [[W:C:DC:Bruce Wayne (Ne 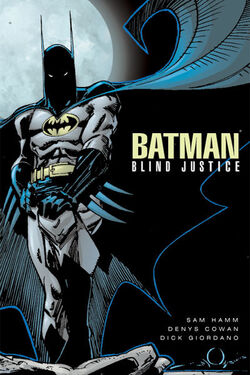 Blind Justice is a Batman storyline written by Sam Hamm and illustrated by Denys Cowan. It's a three-part arc but the issues are oversized as a special event to celebrate the 600th issue of Detective Comics. The story involves Bruce Wayne being accused of treason and looks into the men who trained him to be Batman, as he hunts down a mind-hopping villain named Bonecrusher.

Commissioner Gordon calls in Batman to look at a liquefied human corpse. Batman tracks down a culprit, a huge muscled villain named Bonecrusher with a low-frequency sonic pulse device. Bonecrusher kills several men, then commits suicide when he's caught. Bruce Wayne begins dating Jeannie Bowen, a girl who's come to Gotham looking for her long-lost brother Roy Kane. Roy is a WayneTech employee, and they talk to elderly paraplegic specialist Kenneth Harbinger about Roy's disappearance. Bonecrusher surfaces alive, and Roy surfaces as an amnesiac vagrant sharing brain-waves with Bonecrusher. Bonecrusher kills himself again, and Roy is arrested while duplicating his actions. Bruce reunites Jeannie with Roy, taking them both in as house-guests. Wayne investigates the link to his own company, learning that Roy was part of a secret project. Wayne Manor is attacked by another Bonecrusher, and he self-destructs when Alfred tries to tranquilize him. Roy recovers his memory, and reveals that he was working on remote-controlled killers for the military under Mitchell Riordan. Batman breaks into WayneTech, and finds that Riordan's men have already killed Harbinger. It's revealed that Harbinger was Bonecrusher. Using implanted bio-chips, he's been mentally controlling test subjects to commit crimes. These test subjects included trained military volunteers and a large number of homeless people taken in through fake charity work. Harbinger's notes imply that he escaped, and his mind is now permanently occupying another body. Bruce confronts Riordan, and Riordan threatens him with blackmail. Riordan explains that he's part of a secret military cabal who know he's Batman and have the power to ruin him. Bruce refuses to submit, and the next day he's arrested as a communist traitor.[1]

Bruce Wayne's attorneys question him as the prosecution builds their case. WayneTech's records are subpoenaed, and forged records are found linking him to the illegal arms trade. The years he spent training in the Middle East connected him to several notable anti-American figures. His mentors included Chu Chin Li and Tsunetomo, both well connected to communist authority. Henri Ducard, the man who taught him tracking, is now an arms dealer willing to testify against him. This combined with the brutal death of his parents makes Bruce perfectly fit the psychological profile. Harbinger returns, and begins killing his former coworkers. Riordan finds his program is useless without Harbinger's notes. Before Wayne can stand trial, a vagrant shoots him on the courthouse steps.[2]

Ducard arrives in Gotham, where Riordan has promised to clear his international warrants. The vagrant who shot Bruce is revealed to be Harbinger, now wearing a device that forces people to obey his orders. Bruce awakens from his coma, but he's confined to a wheelchair. Gordon tries to cover for Batman's disappearance to prevent a crimewave. Roy Kane discovers the Batcave, and volunteers to let Bruce use his body with Harbinger's device. Harbinger begins taking revenge on Riordan's men, while Riordan tries to make the Bonecrushers work. Ducard deduces that Bruce Wayne is Batman, but Riordan doesn't believe him thanks to Roy. Harbinger mind-controls Riordan, making him unable to lie, so Harbinger can get his old equipment back. Bruce leaps into a Bonecrusher to stop Harbinger, and sees his new face. Harbinger blows up his apartment and leaps into a new body as the police corner him. Harbinger leaps into another Bonecrusher, and Bruce uses Roy's body as Batman again to chase him. Roy's body falters, and his leg gets stuck in train tracks. Bruce leaps into Harbinger's Bonecrusher to save him, but Roy tries to fight Bonecrusher and they're both killed. Bruce breaks the news to Jeannie, who had fallen in love with him. Jeannie tells Bruce that he ruined her life, and she will keep his secret, but he can burn in hell. Riordan exposes the cartel in a confession, as he is still unable to tell lies. The cartel has him assassinated. Gordon tells Bruce that he recognized Roy, implying that he knows Bruce is really Batman. He suggests that nobody would blame Batman for retiring, and Bruce feigns ignorance. Later that night, Alfred burns Harbinger's device. Bruce returns to the recurring nightmare about his parents' death. He knows he should be able to get over them, but Batman won't let him. That's why he can never have a normal life.[3]

The world is full of evil. It needs a Batman -- to help the weak, to mete out justice. Justice. Yes. We get what we deserve. If there were justice in this world for Bruce, Batman would set him free. He'd make friends, fall in love, live his life -- as normal people do. There'd be no more anguish. No more dreams. No more wracking guilt when he tries to do the right thing -- and fails. Surely he deserves no less... But justice is blind. Blind as a bat.

Retrieved from "https://heykidscomics.fandom.com/wiki/Batman:_Blind_Justice?oldid=1499570"
Community content is available under CC-BY-SA unless otherwise noted.