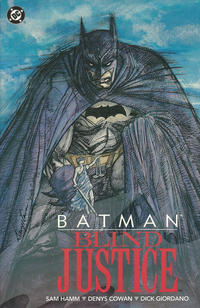 This paperback collects the story Batman: Blind Justice. The story was written by Sam Hamm and illustrated by Denys Cowan, Dick Giordano and Frank McLaughlin. The storyline was published from March to May, 1989 in the comic book series Detective Comics. Originally this paperback was printed in 2002 with a cover by Denys Cowan and Noelle Giddings. The paperback was reprinted in 2005 with a different cover, by Walt Simonson.

In this storyline Bruce Wayne discovers a series of murders linked to WayneTech.

Retrieved from "https://heykidscomics.fandom.com/wiki/Batman:_Blind_Justice_(Collected)?oldid=271051"
Community content is available under CC-BY-SA unless otherwise noted.