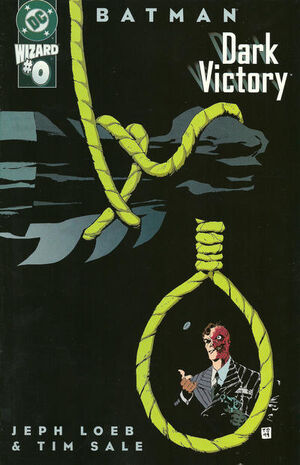 I don't know if I can protect you on this one.

Items: None
Vehicles: None

Batman briefly recounts the events of The Long Halloween, where he, along with Captain James Gordon and District Attorney Harvey Dent, fought a year long crusade to dismantle the criminal empire of Carmine "The Roman" Falcone. During that time, a serial killer named Holiday violently struck out at Gotham's underworld. Batman suspected that Dent was Holiday, but it turned out to be Falcone's son, Alberto. Now, the Roman is dead, and Dent is in Arkham Asylum. Alberto had been sentenced to die in the gas chamber, but during an appeal, he was ruled insane and transferred to Arkham Asylum, where he has a cell across from Calendar Man, who resents him for stealing his modus operandi.

Porter pays a visit to Gordon, who has recently been promoted to Commissioner. She asks for Gordon to hand over all case files on Alberto. She insists that Alberto's civil rights were violated when Batman beat him, and Gordon stood by and let it happen. Gordon warns Porter that she is making a mistake, but she stands her ground. When Porter leaves, Batman emerges from the shadows. Gordon tells him that Porter is not going to be able to work with them, and that he might not be able to protect Batman. He then breaks down, saying that he misses Dent. Batman discourages such talk, and Gordon reminds him that no matter what Harvey has become, he was a friend to them both. As Batman leaves, he muses that the storm currently raging in Gotham is only beginning.

Retrieved from "https://heykidscomics.fandom.com/wiki/Batman:_Dark_Victory_Vol_1_0?oldid=1412966"
Community content is available under CC-BY-SA unless otherwise noted.