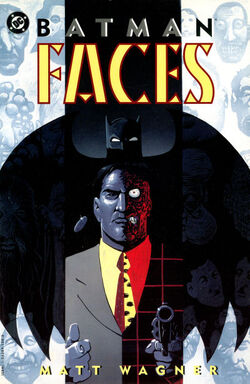 This paperback collects the Batman: Faces storyline from the comic book series Batman: Legends of the Dark Knight. The storyline was written and illustrated by Matt Wagner. It was published from March to May, 1992.

In this storyline Batman must prevent Two-Face from creating an army of deformed, super-powerful slaves. When District Attorney Harvey Dent's face was forever deformed by a vial of acid, his mind was also fractured and the maniacal Two-Face was born. The demented schizophrenic attempts, enraged by his own isolation and alienation, to create a country of deformed men. Taking over a small Caribbean island and forcing plastic surgeons to perform unholy operations, Two-Face begins to create an army in his own image. But when a simple blackmail investigation leads Batman to discover his former ally's mad scheme, Two-Face's pursuit of power is quickly ended.

Retrieved from "https://heykidscomics.fandom.com/wiki/Batman:_Faces_(Collected)?oldid=242825"
Community content is available under CC-BY-SA unless otherwise noted.