Faces of Death is a Batman storyline published as part of The New 52; it was published simultaneously with the storylines Born to Kill, The Court of Owls and Knight Terrors. Foll 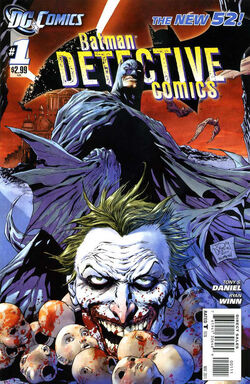 Faces of Death is a Batman storyline published as part of The New 52; it was published simultaneously with the storylines Born to Kill, The Court of Owls and Knight Terrors. Following the timeline reboot in Flashpoint, it establishes Batman's position in the DCnU. It is the debut arc of Tony S. Daniel on his new Detective Comics volume.

After researching and trying to find the Joker for months, Batman learns the serial killer to be responsible for at least 114 murders over the past six years. During his hunt for the Joker, Batman, who has only been active publicly for six years, though in reality he has been active for at least ten years, is declared a dangerous outlaw by Mayor Sebastian Hady. This move is controversial on Hady's part due to Batman's high fame across America as a member of the Justice League and being responsible for cleaning the streets of Gotham. Despite this, Commissioner Gordon struggles to stop the Gotham City Police Department from shooting Batman on sight, despite this, officers like Gordon and Harvey Bullock still meet with Batman via the Batsignal.

As Gordon fights destroy Batman's status as a criminal and an outlaw in Gotham, the Batman finds the Joker stabbing a man to death. While unable to capture the Joker the first time and unclear of the criminals motives, he manages to do so the second time, only for the Dollmaker to arrive in Jokers cell in Arkham Asylum. After a brief conversation, the Dollmaker cuts off the Joker's face and frees him.[1] Bruce Wayne's new girlfriend, reporter Charlotte Rivers, struggles to get his attention. Joker escapes from Arkahm, then Batman and the Commissioner are captured by the Dollmaker's family while trying to hunt him down.[2] Dollmaker is revealed to be the son of a serial killer named Wesley Mathis shot dead by Gordon, who has returned to take revenge with his disciples. He attempts to kill Batman so his corpse can be sold as a collector's item. Luring him to an abandoned hospital with the captured Commissioner as bait, they subdue the caped crusader and prepare him for autopsy.[3] To prove his identity to the paying spectators, they have him fight a roomful of Joker impostors. Harvey Bullock becomes active Commissioner in Gordon's absence, and leads SWAT teams to the abandoned hospital. Batman breaks out of his bonds by demagnetizing them, but is not fast enough to stop Dollmaker and his henchmen from escaping.[4] The public now believes that Batman murdered and skinned the Joker, leading to political protests. He is next forced to chase an assassin named Snakeskin who rips off mob deals. Charlotte tries to infiltrate the Iceberg Casino as an investigative journalist, and the Penguin orders her killed.[5] It's revealed that Charlotte's sister is Snakeskin's sister Chase. The Penguin rounds up a group of super-villains to work with him including Mister Toxic, Hypnotic and Mr. Combustible. Batman and Charlotte investigate the Iceberg Casino's opening, where Snakeskin stabs her repeatedly and traps them both in a freezer.[6] They escape, and Bruce leaves Charlotte with Alfred. Chase sends Snakeskin to assassinate the Penguin, but the gun explodes in his hand and kills him instead. Batman figures out that Penguin hired the super-villains to get rid of his competition, and saves them from an explosion. He then figures out that Chase was working for Penguin, and takes them both down before Penguin can pay her with a bullet. In prison awaiting trial afterwards, a hitman disguised as her attorney murders Chase.[7]

In the back-up feature, Catwoman mentors Hugo Strange's son Eli Strange in crime as he returns to Gotham City. His father decides that he's a worthy successor, and will take him under his wing.[5]

Retrieved from "https://heykidscomics.fandom.com/wiki/Batman:_Faces_of_Death?oldid=1548449"
Community content is available under CC-BY-SA unless otherwise noted.