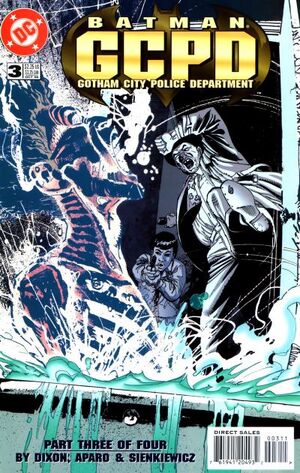 Appearing in "This Year's Murder"Edit

Synopsis for "This Year's Murder"Edit

Pursuing the Teddy Bear Killer, Bullock and Soong are moments too late to save the life of Clay Auerbach, electrocuted in his bath by a man who escapes through a window and evades arrest. Finding no leads from the list of donors, Soong suggests that they investigate the mothers who had in vitro fertilization at the clinic during the relevant period. After interviewing many happy couples, Soong suspects that their most likely culprit is the Wilkins family, who claim not to have had successful results from the treatment, yet have safety plugs in their electical outlets, which suggests otherwise. However, when Bullock returns home, he is disturbed to find one of the teddy bears, dressed to resemble him, waiting outside his apartment.

After the body of one of the insurance-scamming thieves is fished out of the river, Stan Kitch threatens one of his known associates Matches Malone in order to get some leads on his own investigation - Malone, as Batman, suggests to the Commissioner that Mickey Cortese is worth investigating. Meanwhile, Hendricks continues his own investigations, and Bullock endures his psychiatric evaluation. Cell Six attempt to torture Renée Montoya, believing her to be Ambassador Trujillo's wife, but she will not cry out or read the letter they ask her to read. Trujillo is unmoved, but his wife despises the situation.

Retrieved from "https://heykidscomics.fandom.com/wiki/Batman:_GCPD_Vol_1_3?oldid=1504551"
Community content is available under CC-BY-SA unless otherwise noted.