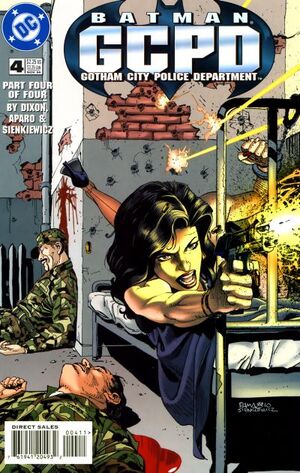 As Renée Montoya, prisoner of the Cell Six terrorist organisation, attempts to escape her bonds, Harvey Bullock confronts Detectives Moses and Murphy, believing them to be behind the teddy bear that appeared outside his apartment- they deny all knowledge, and Harvey's day gets even worse when Gillen from Internal Affairs reminds him that he hasn't been keeping up with his psychiatric appointments. Stan Kitch, meanwhile, has found where his robbers are hiding - once the Tactical Unit has done their work, only one (their leader, Cortese) remains alive, and then only long enough to whisper something to Kitch. While Soong and Bullock discuss possible motives for Mr and Mrs Wilkins to have committed the teddy bear motives, they are interrupted by Hendricks, who has set a trap for the stationery thief. The supplies were sprayed with a flourescent chemical which will glow red under a UV light. Bullock reluctantly allows his hands to be scanned, but not as reluctantly as Gillen, who is revealed as the thief, much to Bullock's delight.

Confronting the Wilkins couple, Soong and Bullock find themselves in a firefight. Mr Wilkins is shot by Bullock, and Kevin Soong leaps into the path of the man's final bullet, aimed at Bullock. At the same time, Ambassador Trujillo makes his speech to the UN, the signal for Cell Six to kill the woman they believe to be his wife. But she, Montoya, has escaped her bonds and fights back, subduing them and calling the MCU for help. Later, Kitch and Sallucci confront George Mellonshaw, having learned that he was behind the whole Cortese affair - he arranged the robberies using information from his clients, then arranged for the goods to be sold back to the insurance companies using his firm as a go-between. He pulls a gun on Kitch, but is covered by Sallucci and arrested. Bullock visits Montoya, recovering in hospital, and also Soong, who will lose a kidney but survive. He explains that the Steve Wilkins was a janitor at the fertilisation clinic, and stole a sample in order to get a baby for himself and his wife. When their baby died after six months, the couple snapped and began killing all the potential donors, blaming them for the child's health even though they never even had the girl taken to the doctor once. As he leaves the hospital, he is told that the False Face Society is causing trouble in the courthouse - time for the Major Crimes Unit to swing back into action.

Retrieved from "https://heykidscomics.fandom.com/wiki/Batman:_GCPD_Vol_1_4?oldid=1504552"
Community content is available under CC-BY-SA unless otherwise noted.