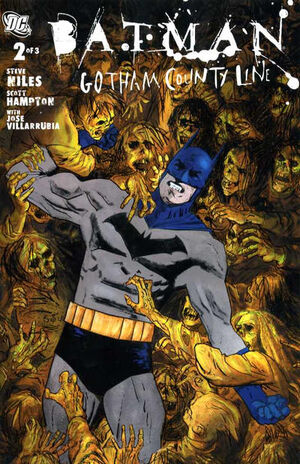 Everyone around Bats, including Alfred, is turning into a zombie and Bats can't figure out why. Deadman shows up to lend him a hand. He tells Bats that he is the victim of a curse which has opened a new space and time which he currently occupies. Deadman tells Bats that his skeptical attitude is preventing him from getting his bearings. Bats tells Deadman to become solid in order to test his theory. Deadman does so and Bats punches him so he tells Deadman that he'll accept the mumbo-jumbo as a working hypothesis. Deadman disappears and Bats is confronted by Radmuller and a horde of zombies.

Retrieved from "https://heykidscomics.fandom.com/wiki/Batman:_Gotham_County_Line_Vol_1_2?oldid=1413496"
Community content is available under CC-BY-SA unless otherwise noted.