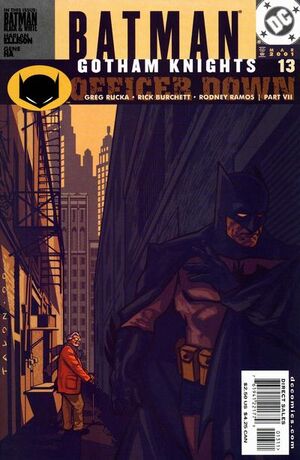 Appearing in "Officer Down, Part Seven: The End"Edit

Synopsis for "Officer Down, Part Seven: The End"Edit

Batman is asked to aid some treasury agents. Someone has stolen rolls of the 'paper from Dalton', which is used to print US currency. At the same time, a master Swiss engraver has entered the country - he has been intercepted by the treasury, but he will not tell them where his plates are for pressing new currency, nor where he is to meet his American contact. Batman is able to get him to talk simply by standing silently in the man's cell - when the engraver cracks, he agrees to help Batman. The plates are handed over and the currency is pressed. When Batman and the Treasury agents arrive, the forgers mock them, saying that as what they have is indistinguishable from genuine money, there is no evidence that a crime has been committed. Batman casually invites them to examine one of the bills under a microscope; he had the engraver add a flaw to the plates - in one window of the White House, his minute figure can be seen waving at them, along with the words, "YOU*ARE*SO*BUSTED*".

Retrieved from "https://heykidscomics.fandom.com/wiki/Batman:_Gotham_Knights_Vol_1_13?oldid=1668424"
Community content is available under CC-BY-SA unless otherwise noted.