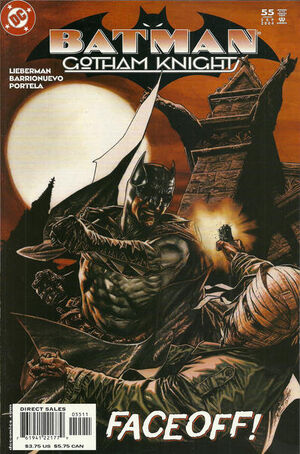 Batman is chasing Hush through Gotham when his rope is cut and he falls. He wakes up; he has fallen asleep in his library. Alfred comes to check he's okay (having heard him yell) and Bruce explains that he doesn't like peaceful times, because he knows it's only a matter of time before it all starts again. At an abandoned hospital, Hush introduces Prometheus to his new home. Elsewhere, the Riddler demands that the Joker gets him out of Gotham that night. The Joker asks if he's really that scared of Hush, and tells him that he will be moved to a place so isolated that it's probably been forgotten, despite an Commissioner Gordon once being held there. He also threatens to return the Riddler to Hush if the information he gave is wrong. The Riddler assures him it's accurate, so the Joker calls for his cars. At the hospital, Hush tells how he completed his first residency and surgery in that hospital. He offers Prometheus mayhem and destruction on a level he could only dream of. The Joker and the Riddler head off to the hideout, but Prometheus blocks them, killing some of the henchmen. The Joker storms out to meet the newcomer, and Hush appears to claim partnership. Hush demands the Riddler, and the Joker refuses. Hush tells Prometheus to kill all the henchmen, but spare the Joker. He does so. In the Clocktower, Oracle hacks into the CCTV cameras, and alerts Batman. On the street, Hush beats up the Joker. Then, he checks the car for the Riddler. Finding he's escaped, he demands the Joker tells him where he's gone. When the Joker refuses to say, Hush tells Prometheus to kill him. The Joker escapes down a manhole. Then Batman arrives. He tries to talk Hush out of his course of action, but Hush won't be dissuaded. Prometheus attacks, and when Batman gets back to his feet, both are gone. The Joker is fleeing down the sewer tunnels, mourning his loss of control over the city. In the Batcave, Batman asks Oracle to track down everything there is to know about Prometheus. They get an ID from a blood sample from the motel in Star City, but Batman doesn't recognize the name. Elsewhere, the Riddler finds Poison Ivy, and asks her to hide him. Outside Gotham, the Joker strides through the countryside, leaving his blood-stained clothes behind him. He arrives at a derelict circus, and collapses in front of a caravan. The occupants open up, and welcome him home.

Retrieved from "https://heykidscomics.fandom.com/wiki/Batman:_Gotham_Knights_Vol_1_55?oldid=710601"
Community content is available under CC-BY-SA unless otherwise noted.