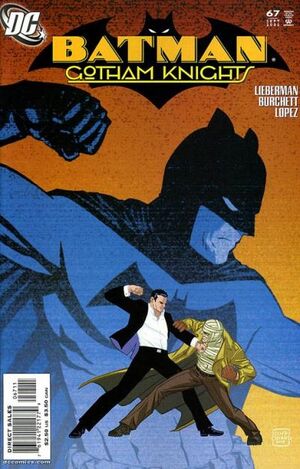 Appearing in "The Life of Riley"Edit

Synopsis for "The Life of Riley"Edit

A struggling film/pornography producer named Riley, discovers that Batman is Bruce Wayne, and attempts to extort one million dollars from Bruce. Bruce later sends Alfred as an envoy, and Alfred attempts to talk Riley out of it. After Riley refuses, Alfred shoots and kills Riley.

Retrieved from "https://heykidscomics.fandom.com/wiki/Batman:_Gotham_Knights_Vol_1_67?oldid=1411349"
Community content is available under CC-BY-SA unless otherwise noted.