Having heard of the Black Glove's plans, Hush returns to Gotham City to destroy Batman before they can strike. Hush seeks revenge on Bruce Wayne's loved ones, and after targeting Zatanna and Catwoman, he manages to capture the latter and removes her heart 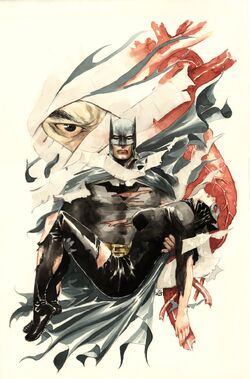 Having heard of the Black Glove's plans, Hush returns to Gotham City to destroy Batman before they can strike. Hush seeks revenge on Bruce Wayne's loved ones, and after targeting Zatanna and Catwoman, he manages to capture the latter and removes her heart from her body. He leaves her hooked to a cardiopulmonary machine, keeping Batman distracted with the help of the Scarecrow. Batman is able to follow the clues leading to Hush's whereabouts, but Elliot, revealing how being discovered was another part of the plan, douses Batman with a muscle relaxant gas while showing him the complex machinery keeping Selina's heart alive and pumping. While Batman is paralyzed, Elliot reveals to have given himself, by plastic surgery, an exact replica of Bruce Wayne's face. He plans to kill and disfigure Bruce, and using his resemblance to him to inflitrate the Batcave, kill Alfred, Dick Grayson and Tim Drake, convince the Justice League about his intention of retiring the Batman identity, resign from the Wayne Enterprise and escape. Mustering up his remaining strength, Bruce catches Hush in an unguarded moment and headbuts him. Using the surrounding surgical equipment to free himself from the table he takes off after Hush. He finally catches up with Tommy at Wayne Manor where his imposter had managed his way into the house. Bruce and Tommy's fight quickly takes them down the hidden entrance to the Bat-Cave. Once there, their battle continues, crashing its way through several of Batman's famed trophies. In the end, Hush tries to escape using the Bat-Gyrocopter but his trademark bandages get snagged in the rotor blades. The copter explodes and crashes into one of the cave's underground tributaries. No body is found.While in her comatose state, Selina continues to have a discussion about her love for Bruce with Zatanna whose telepathic ability allows her to keep Selina company. After Zatanna's goading, Selina decides to give a relationship a try. She awakens from her coma to find Bruce by her side and the two begin a whirlwind romance. Although the affair doesn't last, Selina is comforted in the fact that she at least gave it a try.Selina is given a bottle of scar healing elixir from Zatanna and decides to take some much needed R&R. It's then that she concocts a plan to enact revenge on Hush. Returning to her roots, she uses her connections on both sides of the law to siphon Tommy Elliot's family fortune away. She uses the money to re-imburse his former zombie hospital assistants for their time and to (of course) treat herself. Knowing that Hush more than likely survived the explosion in the cave, she leaves a message telling him that it would be in his best interest to leave Gotham forever.

Having been defeated, Hush decides to commit suicide by jumping over the bridge where his father died. He is recovered by fishermen who recognize him as Bruce Wayne. Hush uses this new idenitiy to assume Bruce's role, and syphones money off for himself. Hoping to stay ahead of the authorities he goes to stay in Vietnam. There he is kidnapped by thugs hired by Selina Kyle. Selina tortured Hush and then orders him to use his identity as Bruce Wayne to help her escape the poucher's camp. After helping her escape he is restrained by Selina two bodyguards who reveal themselves to be Nightwing and Robin. The pair take him to the Wayne Penthouse and lock him up.

This story is a prelude to the events of Batman R.I.P. The last two issues serve as an aftermath to the story after R.I.P

Retrieved from "https://heykidscomics.fandom.com/wiki/Batman:_Heart_of_Hush?oldid=1518394"
Community content is available under CC-BY-SA unless otherwise noted.