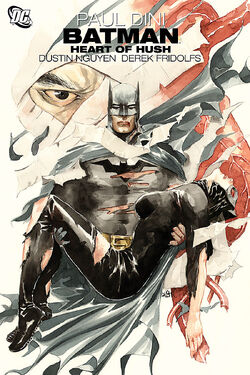 This paperback collects the Batman: Heart of Hush storyline, which was originally published in the comic book series Detective Comics from September, 2008 to January, 2009. The story is written by Paul Dini and illustrated by Dustin Nguyen.

In this story secrets shared years ago between Bruce Wayne and Tommy Elliott, also known as Hush, come to light with dangerous consequences in the present. As Batman finds himself barely capable of handling the diabolical threat of the Black Glove, Hush attacks Bruce Wayne in his personal life by setting his sights on Bruce's ex-lover: Catwoman.

Retrieved from "https://heykidscomics.fandom.com/wiki/Batman:_Heart_of_Hush_(Collected)?oldid=242677"
Community content is available under CC-BY-SA unless otherwise noted.