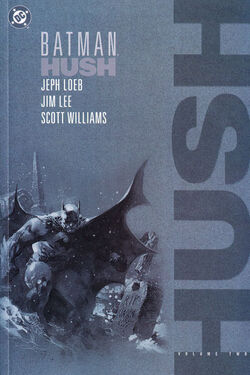 This paperback collects the second and last part of the Batman: Hush storyline. This part of the storyline originally was published from May to November, 2003 in the comic book series Batman. This story was written by Jeph Loeb and illustrated by Jim Lee.

This story is the conclusion of Batman: Hush featuring Batman's showdown with The Joker, the debut of a brand-new Batmobile, a catfight among Catwoman, Talia al Ghul and Lady Shiva, and the true identity of the enigmatic Hush.

Retrieved from "https://heykidscomics.fandom.com/wiki/Batman:_Hush_Vol_2_(Collected)?oldid=1491962"
Community content is available under CC-BY-SA unless otherwise noted.