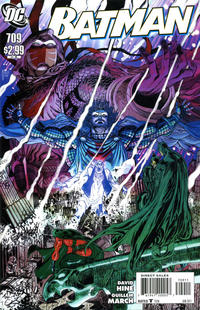 Storyline Aliases
Gotham Shall Be Judged

Collected in
Batman: Gotham Shall Be Judged

Why do you do it? Why go on protecting this city, when you know it's a ink of iniquity. There's no place on Earth more steeped in sin.

Judgment on Gotham is a Batman crossover event written by David Hine, Fabian Nicieza and Peter Calloway with illustrations by Guillem March, Freddie E. Williams II and Andres Guinaldo. It's published in four parts through the volumes Batman, Gotham City Sirens and Red Robin. This is a continuation of Hine's earlier work on the canceled Azrael series, continuing Azrael's adventures from his series' conclusion in The Tears of God. The story is preceded on Batman by Eye of the Beholder and leads into Pieces, on Gotham City Sirens it's preceded by Hell Hath No Fury and leads into Friends, and on Red Robin it's preceded by The Rabbithole and leads into 7 Days of Death.

Batman struggles with the scar he received from Azrael stabbing him with the Sword of Sin, although it's only supposed to hurt the guilty. When the Crusader begins destroying Devil's Square, Batman rushes to stop him alongside Catwoman and Red Robin. Azrael arrives and stops Crusader from killing Batman, but refuses to stop him from razing the city. He explains that they will burn the city to the ground unless Batman can find one truly righteous man in Gotham within the next 24 hours. Elsewhere Ra's al Ghul and Hans Gerlicht prepare the last of their Angels of Death, with plans to destroy Gotham using Fireball as a living bomb.[1] Red Robin is the first hero that the Angels of Death test, putting him through a gauntlet to save lives across the city. Drake uses MoneySpider to help him investigate the situation through Jenny Lane while Crusader taunts him. Red Robin finally arrives at the ending and stops Azrael from killing Mayor Hady. The Sword of Sin proves that he is pure of heart, but he still does not pass their test as Drake is unable to truthfully say that he believes in God.[2] Catwoman is put to the test next, and her sister Magdalene Kyle arrives to help Azrael and Crusader. Catwoman attempts to interrogate Jenny Lane but Jenny does not believe her that Michael could be responsible for the destruction. When she hunts down the Crusader he is setting fire to the orphanage she resided in with her sister as a child. Azrael stabs her with the Sword of Salvation to see her sins and explains that she must atone for ruining her sister's life. He asks her to sacrifice Magdalene in the name of God, which the devout Magdalene has willingly agreed to. Catwoman angrily refuses and insists that they are unreasonable zealots when she tries to argue with them, failing her test as well.[3] Batman is the final hero to be tested by the Angels, and they challenge him for his wound by the Sword of Sin. It's revealed that Dick has repressed a childhood memory where he allowed an older boy to be beaten within an inch of his life and did nothing because he did not like the boy. Batman fails to reason with Azrael as well, but Catwoman arrives with Jenny Lane and her kids to talk to him. They convince Azrael to use the swords on himself, and he sees that his actions are not righteous as Ra's al Ghul has been manipulating him the entire time. Azrael repents and asks the Crusader to put a force-field around Fireball, saving the city although Fireball still dies. Having realized he failed his own test, Azrael asks the Crusader to take him away despite everyone's protests. The boy that Grayson allowed to get beaten forgives him, and acknowledges that he's done enough good in his life to make up for it since then. Ra's al Ghul and White Ghost are frustrated that their plan to destroy Gotham failed, but Ra's merrily reminds himself that he only needs to defeat Batman once.[4]

Retrieved from "https://heykidscomics.fandom.com/wiki/Batman:_Judgment_on_Gotham?oldid=1548444"
Community content is available under CC-BY-SA unless otherwise noted.