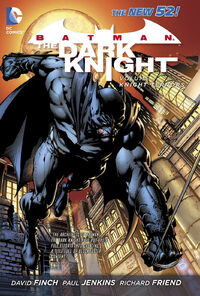 Knight Terrors is a Batman storyline published as part of The New 52 alongside Born to Kill, The Court of Owls and Faces of Death. Following the timeline reboot in Flashpoint, it establishes Gotham City continuity in the DCnU. It's the debut arc of Paul Jenkins and David Finch on their second volume of Batman: The Dark Knight.

Delivering a speech about fear during a Wayne Enterprises event, Bruce Wayne meets the lovely young Jaina Hudson, who flirts with him aggressively. The internal affairs agent Lieutenant Forbes starts to question him about Batman's vigilante actions and his connections to the GCPD. Batman deals with a break-out at Arkham Asylum where all of the super-villains appear to be on some sort of steroids. The only clue is a mysterious woman he is unable to catch called the White Rabbit, and she leads him to a monstrously over-sized Two-Face.[1] This new monster calls himself One-Face and almost defeats Batman, but starts bleeding out of his eyes and collapses. They discover that the serum is a modified Fear Toxin that eliminates fear, causing the victim's body to pump itself full of adrenaline. The White Rabbit appears again and leads him to a pumped-up Joker.[2] It's revealed to be Clayface in disguise, and The Flash arrives to help as White Rabbit escapes. Batman pays a visit to Forbes and tries to scare him into backing off. He begins going on dates with Jaina Hudson. Flash and Batman team up to investigate their only lead on the serum, rare plants owned by Poison Ivy.[3] They find her missing, and fight her deadly toxic plants then escape. Deathstroke attacks the Batplane mid-flight, using the same serum, but Batman survives. He finally hunts down his next connection, the Scarecrow.[4] They fight, and Scarecrow injects him with the serum. Batman goes temporarily crazy and attempts to kill Superman with his bare hands, but gets knocked out.[5] Surviving, he realizes that super-charging his adrenaline was the only way to survive the poison. White Rabbit appears again, and leads him to Bane, who reveals himself to be behind everything. The new strain of Venom he's been using has been making him smarter.[6]

Retrieved from "https://heykidscomics.fandom.com/wiki/Batman:_Knight_Terrors?oldid=1552256"
Community content is available under CC-BY-SA unless otherwise noted.