Knightquest was a multi-part storyline published by DC Comics from 1993-1994. It is the second chapter of a three-part trilogy colloquially referred to as the "Knight Saga". Knightquest follows events chronicled during the "Knightfall" story-arc and leads into the multi-part final chapter, "[[Kn 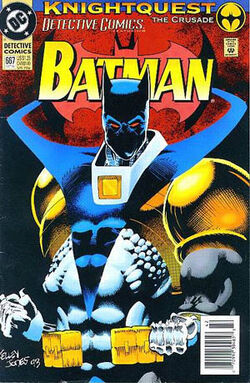 Knightquest was a multi-part storyline published by DC Comics from 1993-1994. It is the second chapter of a three-part trilogy colloquially referred to as the "Knight Saga". Knightquest follows events chronicled during the "Knightfall" story-arc and leads into the multi-part final chapter, "KnightsEnd". Knightquest itself was divided into two separate arcs named "Knightquest: The Crusade" and "Knightquest: The Search". Knightquest ran through alternating issues of Batman, Detective Comics, Batman: Legends of the Dark Knight and Batman: Shadow of the Bat with periphery chapters taking place in Catwoman (Volume 2), Robin (Volume 4) and Justice League Task Force.

Knightquest: The Crusade follows the story of Jean-Paul Valley as he became increasingly violent and mentally unbalanced as he replaced Bruce Wayne as Batman in Gotham. During this time, he drives Robin away because he believed Gotham post-Bane to be so tough that only violence could answer its criminals. Indeed, in several issues Robin is left horrified as Jean-Paul ferociously attacks common criminals, often with a weapon and sometimes nearly to death. This surge of violence from Gotham's defender put pressure on Batman's relationship with Police Commissioner Gordon, who begins to distrust and even fear the new Batman and eventually comes to realize he is not the original. All of Jean-Paul's actions are compelled by "The System"; on numerous occasions, he sees the ghosts of his ancestors giving him advice on how to run Gotham and he is driven to near insanity by the time the saga ends. He repeatedly redesigns his Batman costume, adding more gadgets and lethal weapons, including laser, razor-sharp Batarangs and a flame-thrower. Eventually, he also adds a Bat-symbol, matching the one used for the series' logo. Valley expresses desire, through narrative, to be a better Batman than Bruce Wayne, especially when he discovers his lack of interest in detective work caused him to make false assumptions about Catwoman (he thought she would sell a powerful nerve gas to terrorists when she merely wanted to dispose of it so it couldn't be used to hurt anyone). His questionable actions culminate when he encounters the serial killer Abattoir, who is keeping an innocent prisoner in a secret torture chamber. Jean-Paul purposely lets Abattoir die, thereby condemning the prisoner to death as well. Other notable villains Jean-Paul faces include Mr. Freeze, Joker, and Clayface. Of these villains, the most notable encounters are with Catwoman and the Joker, both of whom could tell Valley wasn't the original Batman (Catwoman because he didn't give out the pheromones that Bruce did and Joker mainly because of his psychotic bond with Batman but also by judging his movements and seeing that they weren't as graceful as Bruce's).

Knightquest: The Search follows Bruce Wayne and Alfred's search for Jack Drake and Shondra Kinsolving, with whom Bruce Wayne falls in love in the midst of his rehabilitation sessions. Kinsolving's brother-by-adoption Benedict Asp kidnapped her to use her special powers to kill people at a distance. Asp demonstrates this new form of mass murder on a small English village. When Bruce Wayne finds Kinsolving, he finds himself caught in the middle of a telekinetic tug-of-war between Asp and Kinsolving. The battle climaxes with her refocusing her energy to defeat Asp, with a side effect of the battle being that Bruce's broken spine becomes healed. However, the drugs forced onto her by Asp, not to mention the effects of the fight with Asp, reduce her mind to that of a child, and Wayne reluctantly puts her into a mental institution.

Bruce eventually leaves England to return home to a civilian life in Gotham, but Alfred remains in England, not wanting to see Bruce Wayne damage his body further. He does not return to Gotham until a while later, when Dick Grayson persuades him to do so in later issues.

Retrieved from "https://heykidscomics.fandom.com/wiki/Batman:_Knightquest?oldid=1552546"
Community content is available under CC-BY-SA unless otherwise noted.