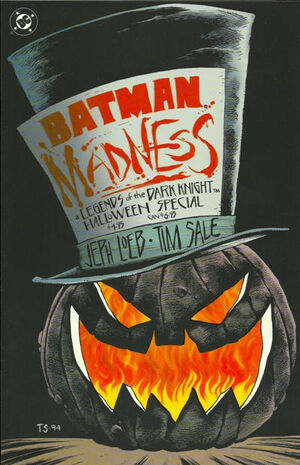 Barbara Gordon rides on a train to meet with her Uncle after shopping. As they begin to walk away, talking, both the Mad Hatter and Batman crash down onto the top of the train. The Mad Hatter runs and Batman gives chase and causes them both to crash through a building, landing right in front of a playing card with a Queen on it. The Mad Hatter begins to come to a sudden hypnosis and shoots the Batman, knocking him off a ledge and onto a pile of playing a cards. This allows the Mad Hatter to escape.
Barbara and Commissioner Gordon argue over whether Barbara should be allowed to leave their home by herself which ends with Barbara leaving and the Commissioner regretting yelling at her. Soon after, Barbara gets captured by the Mad Hatter and she wakes up in a reenactment of the tea party from Alice in Wonderland. She is also with a man who had been kidnapped and dressed as the rabbit from the story as well.
Batman has a dream in which he is in mother's arms before waking up to walk out of the warehouse, injured from his fall.
The man in the bunny suit manages to escape, and when he is found by the Commissioner - who is looking for Barbara - he manages to tell him where the Hatter is. The Commissioner has his men ready themselves outside of the building, but Batman approaches him and tells him to wait.
Batman goes inside and begins to pursue the Mad Hatter. He fights a few of his guards and reaches him, but the Hatter has Barbara at gunpoint. The Commissioner, in a fit of fatherly defence, bursts through the window, causing the Mad Hatter to flee and run to a mirror. Batman shatters it and causes the Hatter to fall to his knees in defeat.

Retrieved from "https://heykidscomics.fandom.com/wiki/Batman:_Legends_of_the_Dark_Knight_Halloween_Special_Vol_1_2?oldid=1699722"
Community content is available under CC-BY-SA unless otherwise noted.