Part of the 'Halloween' event 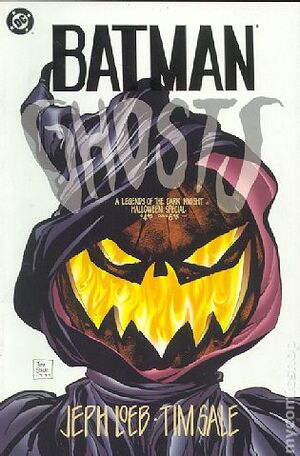 The Penguin crashes a dinner party that Bruce Wayne is attending, and Bruce changes into Batman and begins to engage the Penguin. He pushes him out of the window and they both begin falling. Batman grapples onto a close ledge. As the Penguin falls he uses a jetpack to fly away to safety. When Bruce returns home, he proceeds to go to bed. While sleeping he has a dream similar to that of the story of a Christmas story. He is visited by the spirit of his father who tells him he shall be visited by three spirits. The first spirit takes the form of poison Ivy who shows him his past in Halloween and how his father was never around to take him out trick or treating. She also shows him his past of how he met Lucius Fox and how he saved Lucius' life. The second ghost is that of the Joker, showing him how he's changed since he became Batman both good and bad. The last is a hooded man who shows Bruce when he dies in the future and how few will miss him if he went on being alone as he is. The hooded man the proceeds to take off his hood and reveals to be Bruce himself with the batman costume on, but rotted to a skeleton. Bruce then wakes up as Trick or treaters approach his home. Once they do he come to them with a bowl of candy and tells them "Happy Halloween".

Retrieved from "https://heykidscomics.fandom.com/wiki/Batman:_Legends_of_the_Dark_Knight_Halloween_Special_Vol_1_3?oldid=1717440"
Community content is available under CC-BY-SA unless otherwise noted.