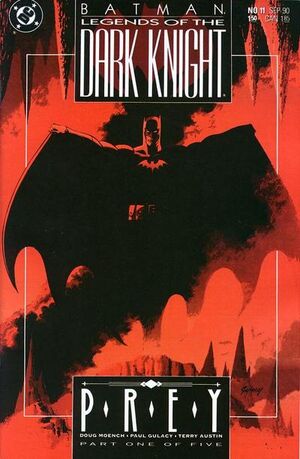 The Batman himself -- his psyche -- is almost an obsession with me.

Batman interrupts a GCPD stake-out to interrogate a drug dealer his own way before throwing him to the police, angering an officer named Max Cort who doesn't like vigilantes. Later that night James Gordon, psychologist Hugo Strange and Mayor Klass appear on late-night talk-show Nighttime with reporter Jud Fellows to discuss Batman. Strange psychoanalyzes Batman while Gordon angrily protests the psycho-babble. Gordon is reluctantly appointed as the head of a new anti-vigilante task force by Klass, with Strange serving as an official consultant and Cort as the first enlisted. Batman traces his leads back to a gangster known as Manny "The Fish" Cardona, while Cort conducts a raid on the same warehouse to test his new task force draftees. Catwoman observes the events while committing a robbery. Batman takes out the criminals and then must fight Cort's men, escaping after embarrassing them but leaving his Bat-Glider behind. Hugo Strange starts wearing a homemade Batsuit in his apartment to get inside his enemy's head, concluding that Batman must have been the victim of a tragedy and ultimately envying his sheer power.

Retrieved from "https://heykidscomics.fandom.com/wiki/Batman:_Legends_of_the_Dark_Knight_Vol_1_11?oldid=1499473"
Community content is available under CC-BY-SA unless otherwise noted.