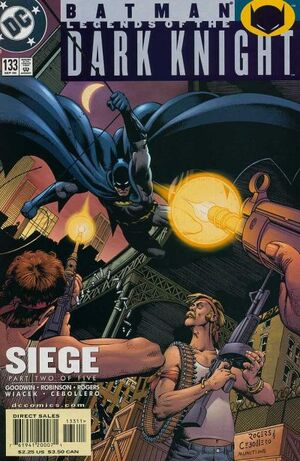 There's war in Gotham City. Perhaps where crime is concerned, there always has been. But seldom this open, this rabid. A madness seeping into every stratum of criminal society. Escalating like a plague, threating to surpass even the horror that created me.

The story begins with two gangs having a gun fight under a bridge. Batman swoops in and defeats both gangs in an instant.

Later, Batman finds the gang's weapon supplier in his mansion naked with two women doing drugs. Batman throws one of the gang member's broken gun through the window and arrests the three of them.

In the GCPD building, the gang members and the supplier are taken away. Batman and Gordon are having a conversation in his office. Gordon says that the supplier will probably make patrol, but Batman says that he will never stop looking over his shoulder from now on. Gordon comments how frustrated he is how bad crime is now. All his police can do is find them when it is happenning. They can't find the leaders like Batman can.

The next day at a breakfast meeting for politicians, Gordon is sitting with Silver St. Cloud. The two are having a conversation about the future of Gotham. Wayne discusses how tempting St. Cloud is for him but he knows that they can never be together.

In the new Batcave, Wayne is looking at the Batcomputer. He gets up and goes into his new house. It isn't Wayne Manor but it's equally as nice.

Wayne goes to Wayne Manor and fights Alfred Pennyworth. Wayne tries to pursuade Alfred to move with him, but Alfred refuses. He loves Wayne Manor. He can't just leave.

Arriving into Gotham is Colonel Brass and his partner Nightbird. Nightbird drops Brass off at an abandoned monorail station where he meets his other partner Priest. The two have a conversation as they walk to the monorail. When they are at the top, they find their other partner Oates sticking weapons into his truck. Their plan is to hide their stolen weapons deep in the truck to hide it.

At the Wayne Foundation, Bruce Wayne bumps into Silver St. Cloud. The two are awkward with each other, but St. Cloud collects herself and moves on. St. Cloud stops herself and returns. She starts the conversation again with an appology. Wayne appologizes as well and the two stare deep into each others' eyes. St. Cloud suggests that they try again, but Wayne notices the Batsignal in the sky. He isn't paying attention, makes up an excuse, and runs away.

In the Batcave, Wayne suits up and Alfred assists him. The butler briefs the vigilante and Batman runs out.

At the waste disposal plant, gang members are rigging the place to blow. Batman arrives at beats the gang members, disables the bombs, and destroys their getaway vehicles.

At the monorail station, Nightbird and Brass talk. Brass talks about his past and how he started working for Jack Wayne. Jack Wayne admires young Brass' spunk and criticizes his own son, Thomas, for reading too much.

In present day, Silver St. Cloud is organising a convention when Brass arrives. As she's leaving, she is attacked by Brass and his men. She fights them off temporarily and makes a run for it.

As the goons chase her, she can think of only one place to run, the Wayne Foundations. When she arrives, she finds Colonel Brass waiting for her. He grabs her and the story ends.

Retrieved from "https://heykidscomics.fandom.com/wiki/Batman:_Legends_of_the_Dark_Knight_Vol_1_133?oldid=1483958"
Community content is available under CC-BY-SA unless otherwise noted.