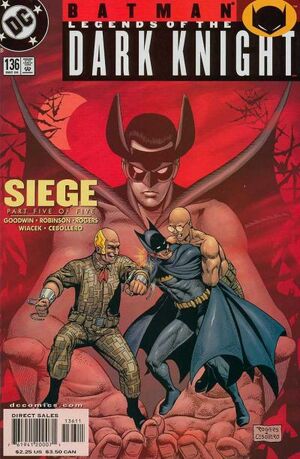 You think I'm crazy? Perhaps the battlefield can make madmen out of anyone. But that doesn't change the fact I'm a walking dead man suddenly very tired of life.

Wayne Manor has just been breached by several theives. One of the thieves talks on the radio but he does not get a response from his other partners. One of the thieves finally responds: Priest. The first thief tells Priest that Strother and Oates aren't responding. Something's wrong. Suddenly, the Batman flies in.

On the roof of Wayne Manor, two other thieves explode the roof and make their own entrance. The two hop down. The man, Colonel, admires the building. The woman thief he is with says that she will take point.

Back with the Batman, the hero leaps through the window as Priest exclaimes with excitement. The thief has longed for a fight with Batman. The intruder shoots his crossbow, only for Batman to catch the arrow in his hand. Priest shoots two more shots, but Batman catches both without breaking a sweat. Out of arrows, the henchman pulls out his knife and charges at the Dark Knight. They begin to fist fight.

With the other thief Colonel, he is walking with is partner whom he addresses as Nightbird. The two are walking down a strange crypt when Nightbird asks about the gold. Colonel says that there is no gold. They have a goal. The mission is destroy Wayne Manor, not steal anything from it.

Back with Batman, the two continue to fight. Batman knocks Priest to the ground, but the villian gets back up and charges at the hero. He misses miserably, though, and the Priest flies out the window to his death.

In the crypt, Batman arrives and makes his prescence known to Colonel and Nightbird. Colonol takes out his pistol and fires into the rafters trying to hit the hero. The man demands Nightbird to shoot at the Dark Knight, but she refuses, saying that she kills for a fee and not for fun. Furious at his partner, Colonol opens fire on Nightbird, killing her in three shots. Her body then falls off of the platform they are on.

To even the odds, Batman throws a batarang and knocks the weapon out of Colonel's hands. The Dark Knight descends from the ceiling ready to fight the man in a fair fight.

Colonel Brass changes the topic. He says how he knows that Batman and Bruce Wayne are one and the same. Wayne is shocked. He begs to know who told him. The Colonel says the only person who told him, was Thomas Wayne.

Brass flashes back to a party that the Wayne's are hosting. Thomas Wayne had just fulfilled his father's dying wish, use Brass' dirty money to do something good. Wayne, with the money, made the "Wayne Foundation." Suddenly, a younger Colonel Brass appears with one of his spies. They are ready for their plan.

Brass and his team take out their pistol and demand peoples' valuables. Brass recalls how they didn't go for the money, just for Thomas Wayne. Brass took aim at the Wayne.

Suddenly, fate comes into play. One of the Colonel's spies takes Martha Wayne's broach. Thomas Wayne, not afraid to fight back, punches the thief. The man accidentally shoots his gun and the bullet hits Colonel Brass in the shoulder. The crowd explodes with fear and begins to evacuate the building. The police arrive and Thomas Wayne is busy beating up the party-crashing henchmen. The Colonel, wounded, makes a retreat as he runs from the cops in all the craziness.

Back in present day, Colonel Brass says that he determined the Batman was Bruce Wayne because Thomas Wayne had the same exact fighting style. The two share a brief conversation where Brass admits that he's dying. He has to finish his goal now.

Wayne offers Brass mental help, but the Colonel only springs his gauntlets to show dual shivs. Batman avoids hurting the dying man until he realizes that this is exactly how Silver St. Cloud was hurt. Wayne punches Brass in the jaw. The two continue to fight, but then Batman is tackled by a large musceley man.

The large henchmen is revealed to be the henchmen that flew out of the window earlier in the story: Priest. He somehow surived with minimal injuries. Amyway, Batman and the Priest duke it out with Batman obviously winning. Brass gets the Dark Knight's attention and the battle is put on pause. Colonel Brass announces that he has just rigged the cave they are in to blow. Brass clicks the detonator and Batman glides out alive.

On the ground, Batman finds Alfred walking towards him. He is hurt. The butler has a bruise under his eye and he is walking with a limp. Alfred states that one of the intruders attacked him in the cellar but Alfred managed to beat him. Wayne explains to Alfred that Brass didn't know, when he built the Batcave, he reinforced all all of the caverns under Wayne Manor. The explosion did almost nothing to the house.

In the Wayne Manor kitchen, Bruce Wayne apologizes to Alfred for his thoughts towards the house. Wayne Manor is very important to him and he doesn't want to move. Wayne tells Alfred that he has just one more errand for him.

The next day in the airport, Silver St. Cloud, disappointed that Bruce Wayne never talked to her to say goodbye, gets on her plane and leaves.

Back in the airport, Wayne watches her plane take off, holding the glass with a depressed look on his face.

Retrieved from "https://heykidscomics.fandom.com/wiki/Batman:_Legends_of_the_Dark_Knight_Vol_1_136?oldid=1491485"
Community content is available under CC-BY-SA unless otherwise noted.