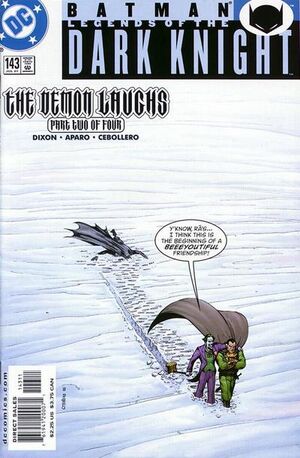 You saved the Joker's life before. Justice could have been served, but you had to be noble.

The story begins with the Joker and Ra's al Ghul walking through an artic field. It's cold, but Al Ghul doesn't seem affected. He talks about his idea to rid the world of people to make the Earth a better place. Where people feel important and special. Joker likes the idea of killing people and the warm weather. The clown agrees to the plan.

In Al Ghul's secret artic base, the two villains walk in and Joker questions his part in this villainous plan. Al Ghul can hold a second Holocaust all by himself. What's he need a silly clown for?

Ra's begins to talk about his immortality and how he has lived for centuries. Joker only makes jokes to Al Ghul's story. The immortal villain grabs Joker by the collar and says that Al Ghul has tried to rid the Earth from humanity tons of times before, but the Batman has always stopped him. Joker understands his part now.

In Oracle's computer room in Gotham City, Batman examines the video surveillance tapes from Arkham Asylum. Batman is trying to find who abducted the Joker from Arkham. The woman running the entire heist used a jammer that blocked out her face on the video tapes.

Batman still manages to find out that the woman is none other than Talia al Ghul. Wayne knows that Ra's and Joker are working together now. Oracle tells Wayne not to worry about it. The two villains deserve each other. They'll just end up killing each other in the end. Batman says he has to stop both of them anyway. Gordon begins to cry, knowing the man who paralyzed her will never be killed because the Batman won't let them.

In Al Ghul's secret base, Joker and Ra's Al Ghul are playing chess while talking about their plans. Joker talks about all his ideas to get rid of the Batman. Their conversation ends when Al Ghul puts Joker in check. Joker moves his bishop and puts Ra's in check-mate on the next move. Al Ghul looks at the board, baffled that he lost. Joker walks away victoriously, saying how good he is at board games.

As Joker walks out of the room, Ra's talks to Talia. Talia questions why her father puts up with someone as annoying as the Joker. Ra's says that he needs to work with the Joker. He both respects and doesn't trust the Clown Prince. Ra's still thinks working with the Joker is the best idea. Talia frustratingly walks away. The Joker is seen watching in the rafters, knowing who to trust and who not to.

Back with Wayne, he and Alfred are getting off a plane and trying to track down Ra's Al Ghul's location. Their first stop is Marseilles.

Back with the Joker, the two villains are having a conversation about their first move. Joker suggests a bio-weapons plant in the Indian Ocean owned by Qurac. They move out.

In the weapons plant, Talia al Ghul and a small squadron lead a silent attack on the plant until their cover is blown. They then demand control of the plant. The scientists are not intimidated, though, because they have access to level four chemicals that could kill them all. They are at a stand-off.

Suddenly, the Joker walks in. He begins to talk to the scientists on the other side of the glass. He pulls out his revolver and aims it at the glass. The scientists says that, if the Joker breaks the glass, they will all die agonizing deaths. No one's that crazy! Joker, slightly offended by that remark, turns to one of Talia's soldier and asks for his name. The man replies and Joker immediately shoots him in the head. The scientists funnel out of their room single file, terrified for their lives.

Joker begins to talk to Talia, making small chat. Talia, unimpressed, criticizes the Joker's tactics. Joker hints that he had been listening to her and her father's conversation earlier and then he begins to look at their prize: a hoard of deadly germs. Talia says that Ra's al Ghul already tried a plague to wipe out the Earth. Joker says that he's going to try the same thing, only in style.

Retrieved from "https://heykidscomics.fandom.com/wiki/Batman:_Legends_of_the_Dark_Knight_Vol_1_143?oldid=1411501"
Community content is available under CC-BY-SA unless otherwise noted.