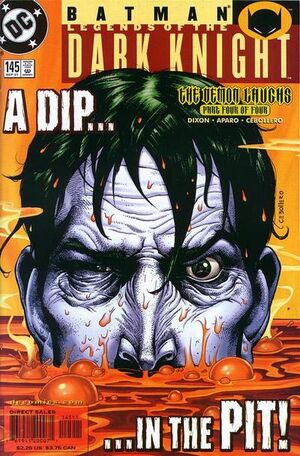 He's dead. The Joker is dead.

Appearing in "The Demon Laughs, Part Four: Mad About You"Edit

Synopsis for "The Demon Laughs, Part Four: Mad About You"Edit

The Joker is dying. Knowing it is the only way to find out Ra's Al Ghul's plan in time to stop it, Batman prepares the Lazarus pit and submerges Joker in the pit. The Lazarus pit causes those dipped into it to emerge in a state of psychosis, and prolonged life. Already insane, Joker emerges from the pit sane. Joker tells Batman he planted a transmitter in Al Ghul's submarine and together they follow it. Batman dives into the ocean and swims to the submarine. He blows up the submarine and the seawater destroys the biological agent. Batman returns to the plane, where Joker has returned to his usual psychotic self. Batman returns Joker to Arkham Asylum and tells him that Ra's Al Ghul has a long reach and an even longer memory.

Retrieved from "https://heykidscomics.fandom.com/wiki/Batman:_Legends_of_the_Dark_Knight_Vol_1_145?oldid=1411503"
Community content is available under CC-BY-SA unless otherwise noted.