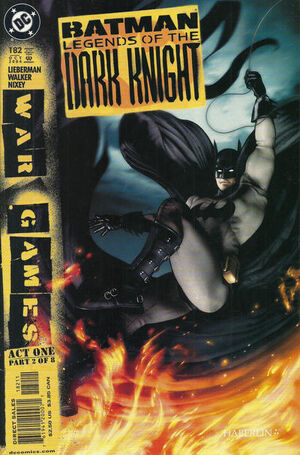 War is business -- and business is -- very, very good.

Appearing in "War Games: Act 1, Part 2 of 8: Behind Enemy Lines"Edit

Synopsis for "War Games: Act 1, Part 2 of 8: Behind Enemy Lines"Edit

Batgirl, Catwoman and Batman try to fight the violence. An overwelmed Oracle struggles to direct them in a city engulfed in violence. Batgirl tries to catch up with the Russians, but it turns into an ambush. Before she can do more, she's sent to the West Side.

Orpheus struggles to keep his gang out of the fight as their terf is attacked. Batman meets with him. He wants Orpheus to make alliances and take over some of the others gangs and try to pull them out of the fighting.

A Navy freighter gets a distress call.

Matches Malone aranges a meet between Orpheus and the Yakuza.

The distress call is a trap. Pirates seize the vessel.

Orpheus' Meet with the Yakuza goes south as they try to take him out. Onyx is wounded, but both escape.

The freighter is brought in to port by Penguin's men.

Retrieved from "https://heykidscomics.fandom.com/wiki/Batman:_Legends_of_the_Dark_Knight_Vol_1_182?oldid=1506938"
Community content is available under CC-BY-SA unless otherwise noted.